Forty-five years ago today, the crew of Apollo 11 was on the way to the moon in their historic first lunar landing mission, the most audacious and globally significant accomplishment in human history.

One thousand years from now, only two things from the period we are living in today will be remembered by history: 1) Human’s first expedition to another planetary body and 2) the development of web enabled mobile technology that connected every human on the planet with each other in real time.

Sadly, after the Apollo program concluded in 1972, humans have been stuck in low Earth orbit and since the final Space Shuttle mission three years ago, our nation has lost our ability to return humans to space.

I wrote about this in a new Huffington Post article How NASA Sold Us the Moon 45 Years Ago but Fails to Market Human Spaceflight Today.

During the Apollo years, NASA was a government agency that got it right. In today's partisan political climate, who can point to a government agency with similar success? That America spent an average of 3.3 percent of the federal budget on NASA during the peak years from 1963-1969, a period when the Vietnam War was in full swing, made the Apollo program not only a remarkable political and technological accomplishment, but also an amazing global marketing and public relations achievement, a subject I covered in my book co-authored with Rich Jurek Marketing the Moon: The Selling of the Apollo Lunar Program.

Today NASA consumes less than half of one percent of the Federal budget, and employs around 58,000 people (private contractors and government employees) compared to 411,000 in 1966. NASA continues to shrink, plagued by those in Washington who have neither the political will nor the bold vision of generations past to harness greatness. As a society -- and as the Nation that funded and supported the Apollo Program, and thus own its legacy -- we must ask ourselves: now what? Are we going to simply squander the legacy of Apollo in platitudes of nostalgia? Or are we going to brave enough to not only dream the big dreams again, but also structure them to succeed?

Where are the influential cheerleaders of the U.S. space program today? 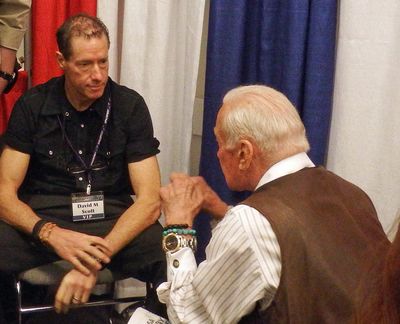 The only people I see promoting human spaceflight in America today are Neil deGrasse Tyson and the men like Buzz Aldrin and Gene Cernan, who walked on the moon over 40 years ago. (Captain Cernan, the last man on the moon, wrote the foreword to Marketing the Moon.)

Several months ago, I had an opportunity to discuss the marketing and public relations challenges of a Mars mission with Buzz Aldrin, who 45 years ago Monday was walking on the lunar surface as Lunar Module pilot of Apollo 11.

Aldrin’s passion and his life’s work over the past decades has been to do whatever he can to get humans to Mars which he outlines in his book Mission to Mars: My Vision for Space Exploration. Aldrin told me that marketing and public relations are critical to generating interest in future human space missions.

While NASA is doing an excellent job with robotic space missions, human space travel seems an afterthought. The real missing frontiers today are tangible public relations and marketing aspects of a human space program, to persuade the public of the program's direct and long-term benefits.

Today, NASA and our politicians on both sides have failed to articulate the benefits of continuing our space efforts. Not so during the Apollo era, when some 20,000 contractors joined with NASA to promote every activity, every achievement, and every derivative product from wristwatches to rocket engines.

When President Johnson was asked by Congress about the expense he replied, "Now, would you rather have us be a second-rate nation or should we spend a little money?"