Real Time at the Oscars 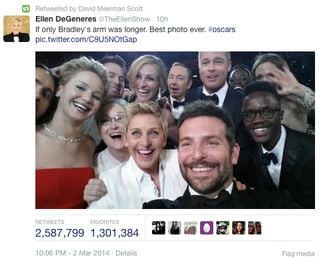 It was fun to see Ellen DeGeneres do a selfie as she hosted the Academy Awards telecast. It injected some fun, real-time quirkiness to what is an over-produced event.

The photo brought Twitter’s servers down for about 20 minutes and by the end of the Oscars broadcast had become the most retweeted tweet ever.

Real-time in your business

Real-time is now a part of every business. Live broadcasts like the Academy Awards and the Super Bowl bring people together. But it’s no longer a passive one way watching of television. Instead we share or thoughts via social networks.

Speeches, corporate events, and conferences include a real-time back channel where people discuss what's happening on stage. Presenters can participate too.

We react instantly to the news. If you have a take on what’s going down, you can showcase your expertise at the precise moment the world is looking for it. Newsjacking is the art of injecting your ideas into a breaking news story.

For salespeople, real-time is critical. Today buyers are in charge. The idea of mystery in the sales process is over. We research someone online before agreeing to a first date—is he a creep? We fire up LinkedIn an hour before an initial business meeting—does she have anyone I know in her network? We watch an on-demand movie trailer before deciding which film to see that night at the theater. We check out restaurant reviews and browse menus before making a booking.

We’re in a new world. It’s real-time. But you know that. Not because I say it a lot but because you’re living the new world every day.