My newest book, Marketing the Moon: The Selling of the Apollo Lunar Program, will release from MIT Press this month. I am mega excited.

Here is the Amazon USA listing for the book and here is the Marketing the Moon book companion site.

This project is a total departure from my social media and online content books, bringing me back in some ways to my years in corporate marketing and PR.

Marketing the Moon is a full-color, 11" x 9 1/2", lavishly illustrated book telling the story of the most successful marketing and public relations campaign in history.

With all the recent hoopla, few people realize that content marketing has been around for more than fifty years. In fact, the greatest story never told (until now) about content as a marketing tool is that it helped to deliver humans to the moon in the late 1960s and early 1970s. This fascinating story is the subject of Marketing the Moon. 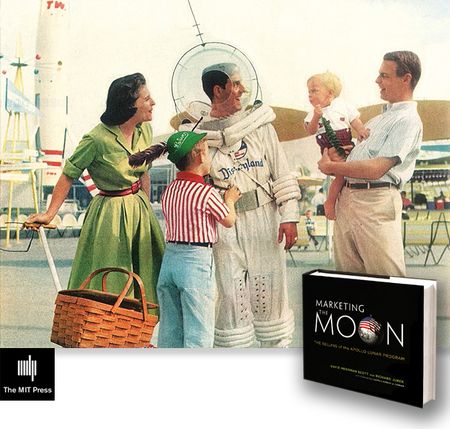 I wrote Marketing the Moon with Richard Jurek, president of Inland Marketing & Communications, Inc. Like me, Rich is a lifelong space enthusiast and a collector of historic space artifacts from the Apollo program. We met several times a year at various Apollo astronaut gatherings and talked about the intersection of our interests in space and marketing – often belaboring the fact that no book had been written to date covering the subject in a way that we would want it covered as practitioners. When we shared the idea with astronauts and those responsible for the marketing of the program, they were very enthusiastic.

I collect hardware used in the Apollo missions which I display on my Apollo Artifacts site, have a large collection of marketing and PR materials from the Apollo program, and am likely the only person in the world with a lunar module descent engine thrust chamber in his living room. Rich has the world’s most extensive collection of two dollar bills flown into space, which are showcased in his Jefferson in Space Museum.

Captain Eugene A. Cernan wrote the forward to Marketing the Moon. Flying to the Moon not once, but twice, Captain Cernan also holds the distinction of being the second American to walk in space and the last man to have left his footprints on the lunar surface.

Documentary film rights to Marketing the Moon are being optioned by Robert Stone Productions. Robert has had four films premiered at Sundance and an Academy Award nomination for Radio Bikini as best documentary film. Robert is now raising funds to produce the film version of the book.

Marketing the Moon was produced and designed by the multi-talented Scott-Martin Kosofsky. We've worked with Scott since the beginning on this project because we wanted to make sure the visual elements were showcased in the book. It contains key documents and images that have never before been published or even seen since their creation. "Marketing the Moon a treasure-trove of period design and advertising," Scott says. "From the typically tawdry to the very cool. It includes Real Mad Men graphics and the typefaces of the era."

It’s been a blast to dig into marketing history by speaking with people who worked on the Apollo lunar program. Rich and I spoke with more than half of the men who walked on the moon, NASA public affairs staffers, PR people from contractors like Boeing and Raytheon, and journalists who worked at publications like The New York Post and Reuters.

“Because without public relations . . . we would have been unable to do it.”
—Dr. Wernher von Braun, director of NASA’s Marshall Spaceflight Center and chief architect of the Apollo Saturn V launch rocket, July 22, 1969

In a world where we think everything is “new” it is fun (and instructive) to look back!

We can all learn from the marketing, sales, and public relations fundamentals that were as important a part of the Apollo lunar missions as the rockets and the astronauts.

Let there be no doubt: Without great marketing, mankind would never had landed on the moon. And it may well be the case that, for lack of good marketing, humans have not yet been to Mars.