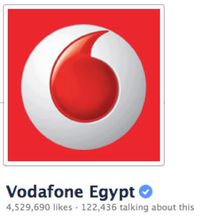 Last week I presented a Masterclass in Cairo and had an opportunity to meet with many marketers who are using real-time engagement and social media effectively to reach customers in the Egypt market.

In particular, Vodafone Egypt is very active and successful in using Twitter and Facebook for real-time customer service.

I spoke with Ahmed Sabry, CEO of IT Vision, a Cairo-based Digital Marketing Agency working with Vodafone Egypt to learn more.

They create content and interact both in Arabic and in English.

Each team specializes in one network and they operate 24x7. Team members follow what’s being said and if required respond immediately. In true real-time fashion, anyone who makes a customer service queries via one of the networks gets an instant response.

Partly through its excellent social media customer support, Vodafone Egypt has grown to become the leading mobile operator in Egypt based on both revenue share and, with more than 36 million, the number of customers.

While it is impossible to make a definitive correlation between growth and social media customer support, it isn’t surprising to me that the company with the best real-time engagement is also the one with the largest market share.

Talking about crisis communications in a country that has recently gone through revolution and currently still operates under curfews and has almost daily protests may seem rather odd. But people draw a distinction between what’s going on politically (seemingly constant crisis) and what is happening with the companies they do business with.

This became an issue for Vodafone Egypt when the company ran a Shokran ("Thank You" in Arabic) campaign during the month of Ramadan in 2011.

The social media campaign encouraged people to show their appreciation to someone that they wanted to thank. Vodafone Egypt promised to retweet messages using the hashtag #VodafoneShokran and measured who got the most votes.

When supporters of former president Hosni Mubarak voted him to the top of the list, suddenly a fun social game became political and turned into a crisis.

The social mead team flagged the issue and very quickly executives decided that Mubarak needed to be removed. People vented on Twitter using the hashtag, but it could have been worse if the company didn’t act quickly.

In fact, according to Ahmed, Vodafone Egypt faces a social crisis nearly every month. But they have real-time monitoring tools in place so they know immediately what’s going on and they can deal with it right away. And once they engage, they monitor so they know if mentions are increasing or decreasing.

I’m often asked by executives of large organizations if real-time customer engagement via social networks is effective. With 4.5 million fans and real-time engagement at Vodafone Egypt driving the company to number one in the market, we have one more concrete example that the answer is yes.