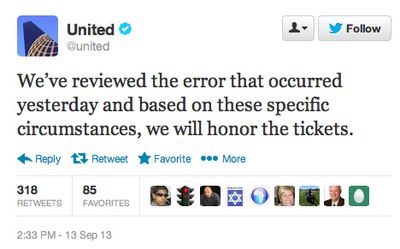 For a short period of time on Thursday, United Airlines Web reservation system was offering up tickets for a price of zero.

Consumers paid just a few dollars to cover taxes and fees. News of the windfall pricing quickly spread on social networks and some people reported getting flights from the US mainland to Hawaii for free.

In minutes, United Airlines realized the error and immediately shut down the reservation systems to sort out the mess.

Will they or won’t they?

The big question over the next hours was: “Will United Airlines honor the free tickets?”

I can imagine the meetings taking place at United that day. Based on my experience in such real-time crisis meetings in other industries, here’s my guess about how this would play out in the immediate aftermath:

- The IT people would be on the hook to say if this was a technical glitch and how to fix it.

- The reservation system and site managers would be on the hook to say if this was human error and who is to blame.

- The accountants would say the airline can’t afford to give free tickets away and would argue to void the tickets.

- The lawyers would be pouring through the site’s terms and conditions to figure out how they could weasel out of the mess.

- The marketing and PR people would imagine the potential social media and mainstream media fallout, and would be strongly supporting honoring the tickets.

The answer is yes!

Good for you United Airlines.

Branding is about the collective opinions of the public and there was a lot riding on this decision. In this case the marketing and PR people won.

Now all those people who got free tickets will be telling all their friends about how United did the right thing by them. Since many of the people who got the tickets learned about it via social networking, we’re talking about a bunch of plugged in consumers spreading the good word.

Smart decisions like this one build goodwill and help to erase lingering negativity from poor decisions in the past like the United Breaks Guitars debacle.