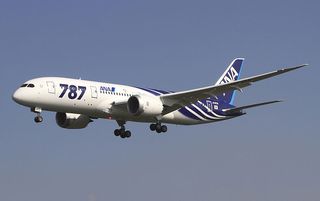 Imagine your newly launched product, one that hundreds of millions of people around the world are aware of, suddenly has safety issues forcing the product out of service with customers and disrupting tens of thousands of people’s lives. That’s the communications challenge Boeing faced when the 787 Dreamliner encountered battery problems early this year.

Airlines around the world had been eager to take delivery of the new plane because it is Boeing’s most fuel-efficient airliner. Regular readers of my blog may recall that I attended the Boston launch event and wrote about the Boeing 787 Dreamliner and airline passenger choice.

When several 787 Dreamliners suffered fires on board in early 2013 related to its lithium-ion batteries, the U.S. NSTB and the Japan JTSB launched investigations leading to a grounding of the world’s commercial 787 fleet.

Boeing was quick to take a strategic approach by creating real-time content to share freely through digital channels and social media to educate and inform constituents around the world.

I had an opportunity to connect with Gary Wicks, who manages much of the digital communications activities for the Boeing Commercial Airplanes unit to learn how he and the team used real-time content to keep constituents up to date on the situation.

“This was an unprecedented situation for us,” Gary says. “No one expected the airplanes to be grounded. So we looked at who are the key audiences? Who do we need to communicate with? It was certainly customers, employees, and third-party experts who were being asked to comment on this situation, but also the flying public and government officials.”

Gary and the team created content to help clarify issues through factual information. For example, a page about the 787 Electrical System includes basic information about airplane power and details on the 787 systems - in text, print-ready graphics, and video. They used their Twitter feeds, including @Boeing and @BoeingAirplanes to get the word out.

“Our best content is providing information that only we can provide,” Gary says. “It has to be compelling and all that, but we try to give a look into the problem that no one else can. We keep that in mind when we developed videos or infographics, because we wanted to make sure this is a look at what we’re doing from our perspective. “

Interestingly, many media outlets took content directly from the Boeing site and used it in their stories. “It was shared widely,” he says. “It was picked up by The Wall Street Journal, for example. A lot of our content was just taken straight from our site and put into other media like GeekWire and AV Week.”

The Boeing team quickly learned that people amplified the #dreamliner story on social media, especially Twitter and Facebook. “There is a great deal of interest and conversation about it,” Gary says. “So we embraced that. We have a story to tell and we have information that we can provide that will help clarify because, believe me; there was a lot of misinformation out there.”

They noticed there were a lot of questions raised via the social channels about what the batteries actually do. “We needed to explain the batteries in a manner that is easily sharable, is understandable for a wide set of audiences,” Gary says. A page Batteries and Advanced Airplanes was created for this purpose. 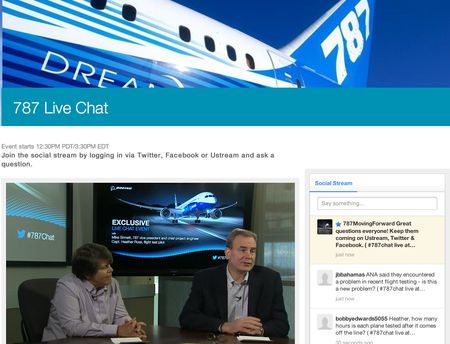 Once government officials deemed the planes airworthy, Boeing ran a live social media chat with Mike Sinnett, 787 chief project engineer and Capt Heather Ross, flight test pilot. The chat was broadcast as video from Ustream and people could engage via the #787chat hashtag.

“We’ve had a loyal fan base for this airplane,” Gary says. “ And we wanted to give them an opportunity to engage directly with us. The great thing about tools like Ustream and live chat is it’s so affordable now to do these kinds of events and the technology works. We wanted to take the opportunity to talk about the battery solution but also talk about what’s next for this airplane. There were 5,000 or so viewers and the comments on it have been really positive.”

An interesting content app launched after the crisis is the real-time 787 flight tracker. Using Google Earth and data drawn from Flight Aware you can select a 787 flight and track its progress in an incredibly visual way.

As I followed the 787 Dreamliner battery crisis unfold, it was clear that most media and members of the public were giving Boeing a fair listen. Sure, batteries catching fire on your plane is a serious matter and people were vocal. But because Boeing communicated well, and in real time, the public was also understanding about the glitches that need to be ironed out in any new product launch.

Jan. 7, 2013: After landing and passengers and crew departing, a 787 experiences an APU battery failure; the US National Transportation Safety Board (NTSB) launches an official investigation

April 26, 2013: 787 airworthiness directive restricting 787 flights is lifted, clearing the way for 787 flights to resume on airplanes that have been retrofitted