Okay, so Instagram and other photo sharing services are a fun way to share photos with your social network. But how could you use the applications to market your product or service?

When Doug Eymer, a Boston-based creative director, was ready to sell his home, he turned to his Instagram feed at deymer and other photo sharing services to get the home out to prospective buyers.

"We have a unique house in a great spot on the water, and we know that water is prime real estate," Doug says. "We also have an incredible view. We feel like that that adds a significant amount to the price of our house, although it’s not something you can really measure. So I started documenting sunrise every morning, and putting them together into a collection. What's really cool is how the marsh grasses change colors and the leaves in the background change colors. It's an ever-changing view." 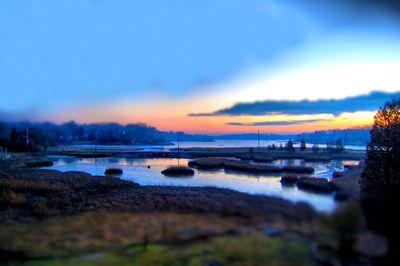 "On 500px I have sets with all of my photographs, including a set for my sunrise photographs," Doug says. "500px is great as far as followers; and as soon as you post, you start getting feedback right away. Usually it’s like one or two words 'love it, great'. And 500px also gives you a lot of information about the activity on your photos, you can rank what the favorite photographs are, which is kind of cool information. You can see what people are responding to."

When Doug listed his home with a realtor, the photo series became a valuable asset, which the realtor linked to. "The realtor that we used was pretty web-savvy, and he was also posting information on his blog about the photos and he mentioned them on Facebook and on Pinterest," he says.

The approach of documenting the view from his home as the seasons change is a subtle but very effective form of marketing.

"It's brought a lot of attention to our house, especially from people in town and that’s built positive word-of-mouth," Doug says. "There are a few people who respond every morning and I think they look forward to seeing what photograph I'm going to post. When I first started, we had a red canoe that was in the yard. I always made the red canoe part of the photograph. One day we had some high water, and we moved the canoe so it wouldn't float away. People said, 'What happened to the canoe? Where did it go?' Then someone made the leap and said: 'It looks like summer’s over. The canoe has been put away'. That was pretty interesting. It was just one little thing, people letting me know that they were actually watching it."

Doug has taken his photo series offline in a very clever way. In various rooms in the home, he has laptop computers and iPads running a continuous slideshow of his photos of the ever-changing view towards the water from 31 Bow Street. "As buyers walk through the house, especially the rooms which overlook the view, we can show how it changes over time. There's summer, the beautiful changing leaves, and photos of wintertime with ice. It gives people another window on what's outside, and gives them an idea of what is there to look at."

Original photos, shared on Instagram and other photo sharing social networking services are a powerful way to showcase you and your offerings. And when you take your photos and integrate them into your online and offline marketing, you set yourself apart from the pack.

Disclosure: Doug is a personal friend and has been my go-to designer for all my projects for the last decade.