Here in the U.S., if you’re plugged into real-time news, you can't avoid hearing about the Etch a Sketch brouhaha.

An aide to Republican candidate Mitt Romney said in an interview that the candidate could reset his campaign after he wins the primary battle "like an Etch a Sketch."

The reference to the classic toy which is familiar to so many played into the narrative that Romney changes positions frequently to appeal to whoever he is talking to at that moment. In many ways it was a perfect story and journalists ran with it resulting in thousands of stories mentioning the toy. (See below for a Google News image of the thousands of stories).

The Etch a Sketch is produced by Ohio Art, a family-run business. The toy has sold more than 100 million units worldwide since its introduction in 1960. I had one when I was a kid and played with it a lot.

When the newsjacking opportunity falls in your lap

Sometimes, the Newsjacking gods shine on you and present an opportunity that is so perfect that you can't help but jump in. So how to do it to the most effect?

So far, Ohio Arts has done an excellent job with media relations but has missed a huge opportunity to create original content.

Get in front of journalists

At least three Ohio Arts executives are doing media interviews. They are using humor, which gets some wonderful quotes into stories like this one which I love from a Wall Street Journal piece Ohio Art's Etch A Sketch Shakes Up Political Debate:

One thing the Etch A Sketch won't do is pick sides in the campaign, Martin Killgallon, the company's marketing director said. "We have a left knob and a right knob," he said, "so we neutrally speak to both parties." 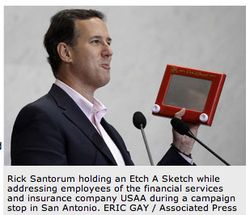 The company sent boxes of Etch A Sketches to the campaigns because candidates including Rick Santorum and Newt Gingrich have been holding up the toy, generating tons of images in the media.

When yours is the product of the moment, particularly when it is such an awesome visual, you can generate ink just by having people hold it in front of cameras.

The only mistake the company is making is that they have not created any original content to take advantage of the sudden media interest.

There is no fun photo on the Ohio Art homepage, no press release in the media section, and nothing new on the company Ohio Art YouTube channel.