How an active Facebook group drove 15,000 people to the Singapore Tattoo Show 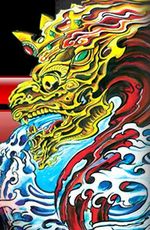 I speak at dozens of conferences a year all over the world. Since organizers usually book me many months in advance, I have some visibility into how they promote the events. It tends to be the same old methods: Send an email and a direct mail to everyone who attended last year, buy some email and postal mailing lists and send some more promotions. Most shows build good Web sites and most have decent SEO. But that's usually it.

What if you're charged with promoting a brand new show?

Because there's no previous attendees to draw from the work is much more difficult.

Or is it? When a show is new, the “old rules” of promotion don’t apply. You can do something new and untested.

The 1st Annual Singapore Tattoo Show, held January 9-11, 2009, was endorsed and supported by Singapore Tourism Board and included Show Ambassador Chris Garver of Miami Ink. The goal was to get 5,000 visitors to the show where over 120 artists from around the globe representing all the various modern tattoo styles ticked away with their machines. All sorts of fun and funky exhibitors were there and Emcee & Show DJ Shawn Lee pumping awesome sounds throughout the hall.

Andrew Peters is the brains behind the social media promotions leading up to the Singapore Tattoo Show, working on both traditional and social media publicity.

What I find fascinating as a show promotional tool was the Facebook Group called Tattoo Artistry that was started three months prior to the event. This is important for all show organizers to study.

Andrew used Facebook as a way for people to connect well before the physical event and the Tattoo Artistry Facebook Group quickly gained 3,000 members, securing a place as the center of this artwork for the region. In a sense, the physical show started with a virtual group. The is new marketing for conferences and events.

The passion of the members of the Tattoo Artistry Facebook group for "their event" meant promoting to their friends. The online community included people eager to attend the live event. Instead of relying on buying expensive advertising, Andrew built a community of passionate fans who built anticipation and buzz for the event.

With more than 15,000 people attending, the event brought three times the expected number of attendees!

The Tattoo Artistry Facebook group is now Asia's largest social network for the tattoo industry, tattoo enthusiasts, and fans. The group will continue to grow as an online destination to connect and plans are already underway for the 2nd Singapore Tattoo Show in 2010.

Alas, no, I was not at the show in person. But with my participation in the Tattoo Artistry Facebook group and one of my World Wide Rave posters appearing in photos I feel like I was there in spirit.