Cue cards were important items used by the Apollo astronauts in the Command Module and Lunar Module 50 years ago. I’ve found that cue cards are a super valuable tool today for speaking on Zoom calls and presenting at virtual events.

Cue cards provided the Apollo astronauts heads up quick reference data for important maneuvers on their missions to the moon. The cards were varied shapes and sizes starting from a little smaller than a playing card going to as large as a letter sized piece of paper.

They were made from a special fireproof card stock and positioned using Velcro directly on the spacecraft control panels for easy viewing.

This Lunar Module cockpit image with several cue cards visible is from the Lunar Module Simulator used by the astronauts in training and which is now displayed at the Cradle of Aviation Museum.

Here’s a photo of an actual cue card used on the Apollo 17 mission that is part of my personal collection of Apollo artifacts. This cue card was  used during the December 1972 outbound journey from the earth to the moon.

It detailed the correct sequence of maneuvers to execute the transposition and docking of the Command / Service Module (CSM) with the Lunar Module (LM) which for liftoff had been located in the Apollo Saturn V third stage (S-IVB).

The steps included separating the CSM from the S-IVB, pitching the CSM 180° and proceeding to dock with the LM by inserting a probe at the top the CSM into a drogue at the top of the LM.

T&D was a complicated procedure that needed to follow a particular sequence which is why cue cards like this were so important.

Unlike many cue cards which were carried in the case of contingencies and never used, this cue card detailed a critical part of the mission and was used to remind Commander Gene Cernan of each step of the procedure. During the T&D procedure, the cue card was positioned on the control panel within his field of view so Cernan could refer to it throughout the maneuver.

I purchased this cue card directly from Commander Cernan. He wrote the forward to my book Marketing the Moon: The Selling of the Apollo Lunar Program that I co-wrote with Rich Jerek.

How I use cue cards today 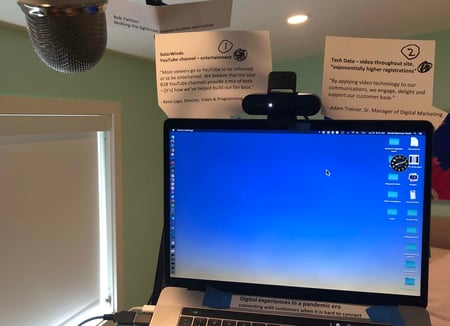 I’ve found that cue cards like the ones used on the Apollo mission are super valuable for me as speak on Zoom calls and I present at virtual events.

In my home studio, I position cards that I create using card stock and tape in place on the back of my computer with blue painter’s tape (so that the tape is easily removed).

I position the cue cards near my Webcam so I can be heads up and remind myself of important information without having my eyes deviate too far from looking directly into the lens.

It’s distracting when a speaker refers to notes while they talk. But the reality is that sometimes, like getting a quote correct or remembering a person’s title, a reminder is helpful.

I used this particular cue card setup in my home studio when I presented at Microsoft Inspire last week. I co-presented with Bob Bejan, Microsoft Corporate Vice President: Global Events, Studios and Marketing Community. Our talk was titled: Digital experiences in a pandemic era – connecting with customers when it is hard to connect.

But it’s not just when I’m presenting. Sometimes I use cue cards on Zoom calls to remind myself of things I want to discuss. This keeps me active and engaged in the conversation instead of heads down in my notes!

Fit for Business: Make Yourself the CEO of Your Own Health