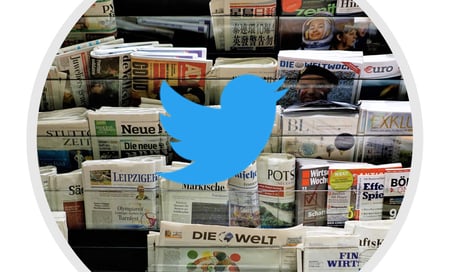 Getting your organization visible on Twitter is an important way not only to reach your buyers but also to reach the mainstream media that cover your industry, because reporters and editors use Twitter for story ideas.

This post is adapted from a revised section in the new 8th edition my book The New Rules of Marketing and PR which published last month.

Members of the media monitor Twitter because it is a real-time social media site for breaking news, following people and companies in the areas they cover, and searching for sources to comment on the stories they are working on.

Some reporters use hashtags such as #prrequest, #journorequest, and #HARO (help a reporter out) in their tweets when they need a person with a particular experience or expertise to interview. These and similar hashtags in other languages serve as a clearinghouse for reporters to find sources. If you follow those hashtags, and watch for them in the tweets of industry journalists, you may connect with reporters looking for exactly your expertise.

For example, as I scan the hashtag #journorequest on the day that I wrote this section, I saw dozens of requests sent. One of them comes from @OllieSamuels: “I’m the BBC Central News Service planning producer for the next couple of weeks - if you have a story that affects local communities all over England then I’d love to see it - DMs open. #journorequest #prrequest.” (“DMs open” refers to the setting on this reporter’s Twitter account that allows direct messages from anybody, even people he does not follow.) If I had an interesting local story in England, I could have messaged him for consideration.

Here’s another example, from freelance feature writer @GiuliaCrouch, who contributes to publications such as The Daily Mail, The Mail on Sunday, and The Evening Standard: “Any SMEs [small to medium enterprises] had an unexpected digital revolution and want to chat to me for a piece (in a national)? I’m thinking bakers who digitised their supply chain, bookstores automating tasks, etc. The quirkier the better. Not just ‘I started selling online.’ Thanks! #journorequest.”

And there’s this one from Lucy Harley-McKeown (@LHM1): “#journorequest Night club owners/workers -- I want to talk to you for a story for Yahoo Finance about reopening. Email me at…”

Spending just a few minutes every day looking for journalist requests can lead to interviews and stories about you and your business.

One successful user of this approach is Ireland-based founder Samantha Kelly (@tweetinggoddess), whose Women’s Inspire Network connects nearly 500 women entrepreneurs from all over the world.

“When I see a journalist make a request via the #journorequest hashtag, I look at what the journalist is interested in as well as their Twitter profile to determine if they are doing a story that somebody in my network can comment on,” she says. “Then I either retweet the request to my followers, or DM a link if I know somebody in particular that would be good for the story.”

Samantha adds journalists to a personal Twitter media list, which she sets to private so that only she can see the reporters she follows. And when she finds one who covers an industry within her expertise, she always follows the reporter in addition to “listing” them.

“Many times, the journalist follows me back,” Samantha says. “Every day, I engage with one of those journalists on my Twitter list. Sometimes I retweet them or reply to them. I’m trying to make sure that I stay top of mind with them.”

Samantha has developed powerful relationships with reporters, and she is considered a valuable resource for them. “Because I help journalists, sometimes they direct message me to ask if I know somebody who is an expert in a topic,” she says. “Often, I can find someone to introduce them to within the members of my Women’s Inspire Network.” Notice that Samantha’s approach is especially powerful given her connection to leaders from a variety of industries.

Ultimately, Samantha’s Twitter-based media relations strategy succeeds because she engages with reporters and editors, helps them out, and shares their information. She’s not just pitching them.

“People don’t realize that it’s all about adding value,” Samantha says. “The more valuable you are to journalists, the more they are likely to use you in their stories.”