The Best Marketer Has Been Elected President 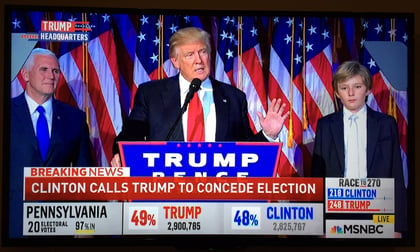 Donald Trump is a marketing genius.

Donald Trump created a strong, memorable message from the moment he announced his candidacy a year and a half ago. “Make America Great Again” (#MAGA) captured his promise to buyer personas. People all over the country knew the slogan.

Quick question: What is Hillary Clinton’s message? Most people don’t remember “Stronger Together” and if they do, I’m not sure they think it’s powerful.

The Clinton campaign used the traditional playbook. Clinton hired all the right people and crafted an enormous machine to run using advertising, grassroots canvassing, and other accepted campaign strategies. Clinton was like a big company hiring a bunch of advertising agencies to run traditional campaigns.

As I've written about for more than a year, Donald Trump focused on real-time media, especially Twitter, and mega rallies all over the country. His tweets and the video of the rallies were reported in real-time by thousands of media outlets. Both of these approaches generated a reported $5 billion in free media for Trump.

There are many lessons here for all marketers. What a fascinating case study. I’ll be parsing the results over the next days.