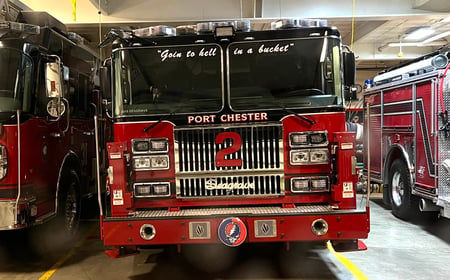 The volunteer members of the Harry Howard Hook & Ladder Company in Port Chester, NY are fans of the Grateful Dead, and they share their fandom in their work as well as with members of the public. This Fanocracy means that members pull energy, new ideas, and deep connections from and then back to like-minded people in the community.

The Harry Howard Hook & Ladder Company was founded in 1858 and the Capitol Theatre was built nearby in 1926 as a vaudeville theater and movie palace. In the 1970s, the Capitol Theatre became a concert venue and hosted bands like Pink Floyd, the Talking Heads, Janis Joplin, and Traffic.

The Grateful Dead played 13 dates at the Capitol Theatre in a one-year span from 1970 to 1971. Members of the Harry Howard Hook & Ladder Company began working as part-time security at the theater during this time and they became Grateful Dead fans. Soon, members were putting the Grateful Dead “Stealie” logo on their equipment to show their fandom. They’ve continued the tradition for more than 50 years.

“The Deadhead community, just like the fire department, are always there to help each other,” says Fire Captain Larry Miano. “That’s how we all survive, by helping each other.”

As an all-volunteer fire department, members work to primarily to help people because they want to, however the comraderie and shared passion over the Grateful Dead is another reason they love to be a part of the company.

Heck the fire company's logo now incorporates the Stealie logo - that's how much the fire department and the band are connected.

In the 1980s, the Capital Theatre transitioned to hosting touring Broadway theater and served as an event space and in 1984 was added to the National Register of Historic Places. It seemed live music was a thing of the past in Port Chester.

But then in 2012 the Capital Theatre returned to concerts when the venue was reopened by music entrepreneur Peter Shapiro with Bob Dylan as the first act booked.

Grateful Dead bassist Phil Lesh has played annual residencies at the Capital Theatre for more than a decade, bringing the music of the Dead back to Port Chester and back to members of the Harry Howard Hook & Ladder Company. 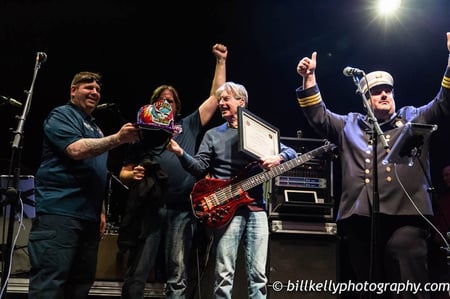 I’ve seen Phil at “the Cap” a dozen or so times, most recently this weekend on both Friday and Saturday nights. And yes, I stopped by the firehouse to say hello to the team!

“The spirit of the Grateful Dead was like a shot of adrenaline for the village of Port Chester once Capitol Theatre reopened,” Captain Miano says. Fans going to shows brought business to restaurants and other establishments in the village.

In 2018, on his 78th birthday, Phil Lesh was induced as an honorary member of Harry Howard Hook & Ladder Company. Grateful Dead fans, members of the company, and Phil himself were all delighted by the presentation on stage at the Cap.

Your Passion is Infectious 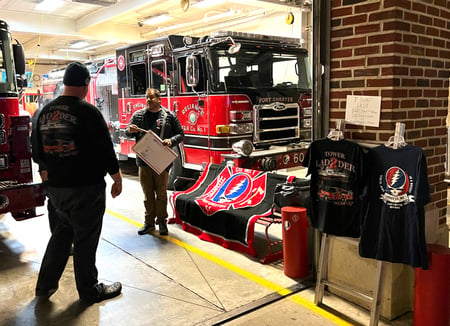 In our interviews with hundreds of fans of a wide variety of things, my daughter Reiko who is my co-author of our book Fanocracy and I learned that people who build their personal passions into their work lives are able to see the world in a different light.

We spoke with enthusiasts of things as diverse as skiing and triathlons, knitting and painting, flamenco guitar and acapella singing, classic cars and RVs who told us that their fandom helped define who they are as people and how they approach their work.

The passion of members of Harry Howard Hook & Ladder Company as Grateful Dead fans as well as for the work they do is indeed infectious.

We all live a truer life by expressing ourselves through fandoms.

Fanocracy is a state of mind when we value ourselves and what we love. And people are attracted to us because of it.