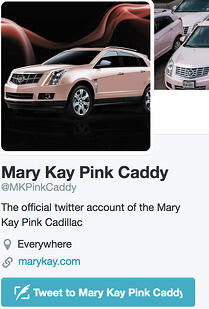 Today I’m speaking at the Direct Selling Association Be Connected conference. I love presenting ideas of real-time sales and marketing to entrepreneurial groups!

I like to sit in on presentations at the events I speak at because I frequently get great ideas for blog posts (like his one), stories for my books, or riffs for my talks. Yesterday, Rebecca Gibson from Mary Kay, Inc. presented on Mary Kay’s iconic Pink Cadillac.

I remember hearing about Pink Cadillacs being given away as an incentive to Mary Kay salespeople as a kid. It was a great public relations tool at the time, and by updating the image, is still a great strategy today.

In 1969, Mary Kay Ash purchased five Cadillac Coupe de Villes, had them repainted to match the "Mountain Laurel Blush" in a compact Ash carried, and rewarded the company's top five salespeople. Since then, GM has painted over 100,000 custom cars for Mary Kay.

According to Gibson, “Today the Pink Cadillac is as vivacious as ever! She’s launched her own Twitter feed and has even recently served as a company ‘spokesperson,’ via social media to spark excitement about its car programs—and career opportunities.”

For Halloween, the Cadillac “dressed up” in various costumes and fans could vote for their favorite. “Help me pick my #Halloween costume! RT favorite to vote.” Of course, Miss Piggy won.

I love this #tbt photo sent through the @mkpinkcaddy feed of older model Cadillacs from years past.

Gibson says that the Pink Cadillac Twitter feed is used to communicate in a fun way. “The Pink Cadillac is an iconic car and having their own to drive is a goal that people have when they join the company,” she says.

I found it interesting that “she” (the Pink Cadillac) does not talk about products at all. That’s what the main @MaryKay Twitter feed does.

But as I learned when I tweeted to @mkpinkcaddy, she does respond in real-time. We had a fun conversation!

In a clever PR move the Pink Cadillac sent members of the media a pink cake during a slow Friday in the Summer. According to Gibson, this generated much enthusiasm from the journalists.

Gibson talked about how the car was used at the company’s annual seminar. She was active on Twitter, posing for photos with people and celebrating “her” 45th birthday. Happy Birthday to me!!! Celebrating 45 years of rolling in style at #MKSeminar

The Pink Cadillac is treasured within Mary Kay and is famous around the world. But to many, it might seem dated. The car’s real-time Twitter feed helps modernize the brand by making its icon retro cool.