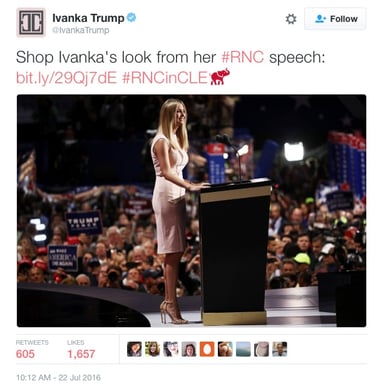 Just a few hours after introducing her father, Donald J. Trump, before his address to the delegates at the Republican National Convention last week, Ivanka Trump tweeted a photo of herself on stage with a link to a Macy's store listing of the Ivanka Trump brand Sleeveless Studded Sheath Dress like the one she was wearing.

This example of newsjacking is a #FAIL because the "Shop Ivanka's look" pointing to her own branded merchandise was seen by many as an  attempt to profit from the Trump presidential run.

Never cheapen your speech with a blatant sales pitch

Whenever you have a speaking slot, unless it is cleared by the conference organizer and unless it would be considered valuable by attendees, you should never sell from a stage. Nothing cheapens a good speech than a blatant sales pitch. Ivanka Trump did deliver an excellent speech at the RNC in my opinion.

I note that many of the Twitter replies are commenting in a negative way on the sales pitch. That in itself would be reason not to send a tweet like this one. And besides, based on the Macy’s customer reviews, the dress doesn’t seem popular.

Oh, and one more thing - the Macy’s listing says the dress is “imported” which contradicts her father’s talking points regarding jobs in America.

For more of my posts about US Presidential election marketing, go here.