Hillary Clinton is Newsjacking her own Benghazi Committee Testimony 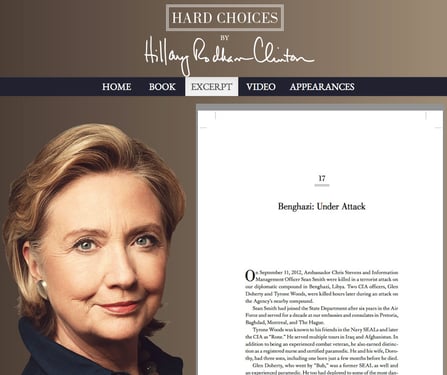 This week, Hillary Clinton and Simon & Schuster, the publisher of her 2014 memoir Hard Choices, made chapter 17 “Benghazi: Under Attack” completely free on the book’s site. All 35 pages are available with no registration required.

I find the timing of this offer fascinating because Hillary Clinton is scheduled to return to Capitol Hill tomorrow to give testimony before the House Select Committee on Benghazi. She is, of course, a candidate for President of the United States so the stakes are high for her appearance before the #BenghaziCommittee.

On September 11, 2012, four Americans, including the U.S. ambassador to Libya, Christopher Stevens, were killed in attacks on U.S. buildings in Benghazi. At the time Clinton was U.S. Secretary of State and since then, Congress has held dozens of hearings and meetings on the matter.

Newsjacking is the art and science of injecting your ideas into a breaking news story to generate tons of media coverage, get sales leads, and grow your business. It’s a sales and marketing technique I pioneered five years ago that has proven effective for many different people and organizations to get noticed.

The House Select Committee on Benghazi will be questioning Clinton tomorrow to learn her views on what happened during the attacks.

By providing a free preview of her testimony in the form of the chapter in her book on the subject, she’s giving the media a head start in writing their stories on tomorrow’s testimony.

A Google News search this morning brought up more than 1,000 news stories for the phrase “Hillary Clinton Benghazi testimony” so clearly there is intense media interest in this story. The offering of the free book chapter this week is a wonderful example of using real-time content to influence people at the precise moment that they are interested. The key is timing.

And for those of you playing along at home, this blog post is also newsjacking because I am offering my take on the book excerpt offer! The founder of the newsjacking movement writing about newsjacking which is in itself newsjacking. Too meta.

Important note: This is a sales and marketing blog, not a political blog.

I am not commenting on Hillary Clinton’s politics nor her U.S. Presidential candidacy. I write about the US Presidential election because it is a massive marketing case study playing out for several years, not because I support any candidate over another. Here is another post I wrote about the election several months ago: Donald Trump Winning the Social Networking Primaries in a Landslide. I’ll be writing more on the sales and amrketing aspects of the election that we can learn from between now and November 2016.