#GOPdebate Advice for Donald Trump: Live Tweet from the Stage! 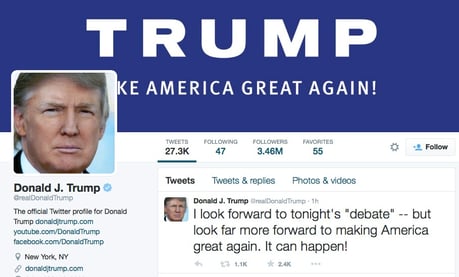 Tonight is the first US Presidential Republican Primary debate and the stakes are high as the field will get whittled down tonight based on each candidate's performance on the main stage at 9:00pm and those relegated to the “kids table” debate at 5:00.

My specific advice to Donald Trump is to live tweet from the stage during the debate!

Trump has the social media chops: As I reported several days ago, Donald Trump is Winning the Social Networking Primaries in a Landslide. Donald Trump - @realdonaldtrump with 3.4 million followers - is way out in front of the pack in the number of followers. Looking at the total number of tweets as a proxy for the level of each candidates' engagement in social networking, Donald Trump has tweeted 27,300 times since he joined Twitter in 2009, which is nearly three times as many tweets as the next most prolific candidate. Tweeting from the stage would be consistent with the Trump brand of making use of Twitter to communicate in real time.

Trump has a history of saying what he thinks: How cool would it be for Trump to tweet an answer to each question asked the other candidates. Given the 90-minute debate format with ten candidates vying for attention, each will get less than ten minutes to speak. Ninety percent of the time a candidate is on the stage he or she isn't debating. What a perfect opportunity to fill the downtime!

Trump is famous for multi-tasking: I’d imagine that Trump will be going nuts on stage when he is not being asked a question. The man runs some 400 companies! If anyone can juggle what’s happening in the room with what’s going down on Twitter, it’s Trump.

Take the world record re-tweet away from Ellen DeGeneres: Her selfie as she hosted the Academy Awards telecast in 2014 was an epic real-time moment. Imagine a Trump selfie from the debate stage!

Prove to us he manages his own Twitter account: Some have speculated that Trump himself doesn’t actually tweet. They say that he has a clever assistant who manages his Twitter. Here’s an opportunity to show that he doesn’t use a ghostwriter.

All of these things are certainly possible. I’ve done each of them at my talks or panel discussions. All Trump needs is his smartphone and the desire. As the outside of Washington DC alternative candidate with business experience, Trump has an opportunity to show a new way to communicate.

Important note: This is a marketing blog, not a political blog. I am not commenting on Trump’s nor any other candidate’s views on the issues. I write about the US Presidential election because it is a massive marketing case study playing out for several years, not because I support any candidate over another.