Dueling Text Messages from the Clinton and Trump Campaigns

What a weekend! I couldn’t stop watching the real reality show that is the US Presidential Election. Over the several past days I have been multitasking with social media, reading the pundits and news reports online (thank you Google News), and watching the cable news political talk shows. And to cap off the excitement there was a town hall style debate last night. I didn’t get much sleep. 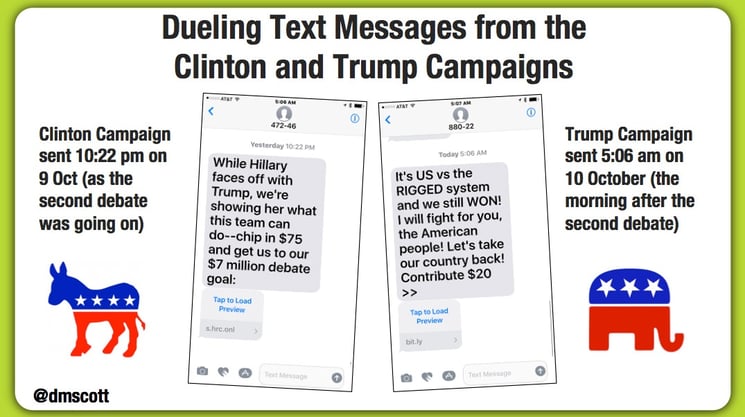 For my ongoing analysis of the marketing aspects of the election season, going all the way back to before the primaries even started, I’ve signed up for the various campaigns’ email lists, text message alert systems, and Twitter feeds. It’s fascinating to see how the campaigns communicate with supporters.

I found it particularly interesting to see how the Clinton and Trump campaigns chose to reach their core supporters by text message in the past few hours. The Clinton campaign opted for real-time with a message going out during the debate while the Trump campaign sent theirs in the early morning post-debate.

There are so many things to read into these two messages.