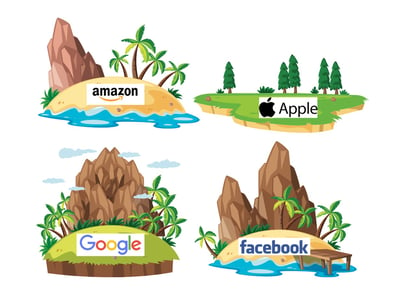 Net neutrality is in the news, but an even bigger problem is looming, the increasing lack of content neutrality.

The island mentality of the world’s largest technology companies including Amazon, Apple, Facebook, and Google isn’t getting nearly the debate that it should. These companies seem to be so focused on keeping users locked into their own content technology gardens that they threaten the easy use of their products and services.

This island mentality problem manifests today in the exact same ways that the repeal of net neutrality is likely to do in future.

Net neutrality deals with how the owners of the Internet’s physical network - the broadband and telephone companies that own the wires - work with the content and applications that use the network. The owners of the pipes have an incentive to treat people differently based on their ability to pay because they have the technology to block or slow down individual sites. That’s now illegal because we currently have net neutrality. However, the FCC released a plan to rescind net neutrality rules and stop policing how carriers treat traffic on their networks.

The same exact problems already exist with how Amazon, Apple, Facebook, and Google treat content on their platforms. These companies deliver the technology infrastructure we rely on every day. Yet they have an incentive to figure out ways to block us from going from their island of technology to a rival’s island of technology.

Get off of my island you dirty rat!

I've just published a much longer version of this analysis with several additional examples from my own experience on Medium. Please check it out.

You'll learn how Apple forced me to use Apple Pay and how Google lost my videos both because of the lack of content neutrality.