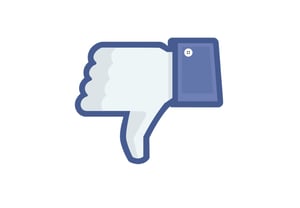 Facebook has been in the news a lot in 2018, and it hasn’t been good. First, the company was under fire for allowing Russian operatives to purchase Facebook ads to influence the 2016 U.S Presidential election. Then it emerged that Cambridge Analytica, a political data firm, gained access to private information on more than 50 million Facebook users. Yes, the problems were bad. But worse, Facebook hasn’t been completely open and honest and transparent as these stories were breaking. I no longer trust Facebook.

There’s a growing #DeleteFacebook movement as well as congressional scrutiny. No, I’m not going to abandon my Facebook accounts like Elon Musk did with the company pages for Tesla and SpaceX.

But I am using Facebook a lot less. I used to go to Facebook every day. Now I’m only there a few times a week. Not because of the news but because I find the platform much less useful than I used to.

I sat down and analyzed how my feelings for Facebook have changed over the past dozen years. It has been a remarkable transformation.

2006-2007: On September 26, 2006, Facebook transitioned from university students only to everyone at least 13 years old with a valid email address. I joined Facebook that week. For the first few years, I thought of Facebook as a cool way to connect with people. I can see what my college friends are up to!

2008-2011: Then I was exploring ideas about how to use Facebook as a marketing tool. I loved sharing examples on my blog and from the stage such as how a Facebook group drove 15,000 people to the Singapore Tattoo Show in 2009.

2012: Facebook became an important tool for social change. Wael Ghonim became the anonymous admin of a Facebook page Kullena Khaled Said, which turned into a critical social media communication point for political change. It brought down the government of Egypt. Wow. Social media is powerful!

2012-2015: There are a bunch of ads here but I get it. Facebook is now a public company and they need to make money. I’m really enjoying connecting with people all over the world who I meet at conferences. When I post something, it usually gets a bunch of social engagement.

2016-2017: The Facebook algorithm really stinks. I don’t seem to be seeing posts from people who I really care about and whenever I post something it gets very little engagement. Sure I can spend money to boost a post, but why should I pay for something that I used to get just by creating something interesting?

2018: They’re lying to me. They know more about me than my wife and daughter know about me and they’re selling that knowledge to advertisers. Yes, I might have agreed to some obscure terms and conditions document at some point but I didn’t read it. I trusted Facebook and they let me down.

The Cambridge Analytica problems stemmed from the ability of certain Facebook apps to access not only the data of the person with the app but also all of their friends’ data too.

The data, a portion of which was viewed by The New York Times, included details on users’ identities, friend networks and “likes.” The idea was to map personality traits based on what people had liked on Facebook, and then use that information to target audiences with digital ads.

Initially, the company hid behind the legal aspects of the situation, using a post in the Facebook newsroom by Paul Grewal, VP & Deputy General Counsel to explain: Suspending Cambridge Analytica and SCL Group from Facebook. The post reads:

“The claim that this is a data breach is completely false. Aleksandr Kogan requested and gained access to information from users who chose to sign up to his app, and everyone involved gave their consent. People knowingly provided their information, no systems were infiltrated, and no passwords or sensitive pieces of information were stolen or hacked.”

Customers don’t want to hear that the data in question was legally delivered. Checking a box in a terms and services is something we all do. We click because we trust, not because we read the fine print. Hiding behind the lawyers is a sign of trouble in a company.

Mark Zuckerberg weighed on his Facebook soon after to apologize.

"While this specific issue involving Cambridge Analytica should no longer happen with new apps today, that doesn't change what happened in the past. We will learn from this experience to secure our platform further and make our community safer for everyone going forward."

Soon after, a widely circulated Ars Technica report appealed saying that Facebook surreptitiously scrapes call and text message data from Android phones and has done so for years. Again, Facebook responded that it only collects that information from users who have given permission:

“Call and text history logging is part of an opt-in feature for people using Messenger or Facebook Lite on Android. This helps you find and stay connected with the people you care about, and provides you with a better experience across Facebook. People have to expressly agree to use this feature. If, at any time, they no longer wish to use this feature they can turn it off in settings, or here for Facebook Lite users, and all previously shared call and text history shared via that app is deleted. While we receive certain permissions from Android, uploading this information has always been opt-in only.”

Opt-in only to me means somewhere along the line I checked a box I didn’t understand. Is that my bad for not understanding the Ts and Cs? Of course not! If I feel taken advantage of, then Facebook is wrong.

Yesterday, Zuck apologized again, this time in full-page newspaper ads: “We have a responsibility to protect your information. If we can’t, we don’t deserve it.”

I find Instagram a lot more interesting than Facebook now and I go there every day. I don’t see the same heavy-handed algorithms and the ads aren’t too bad yet.

Help. There’s no way out…