Fifty years ago this week, the historic Apollo 17 mission sent humans to the moon for the last time (so far). It’s super cool that also this week, the Orion spacecraft of the Artemis I mission successfully returned to Earth after traveling to the Moon. Both missions, 50 years apart, were triumphs for NASA.

The Apollo 17 astronauts shot the iconic blue marble photo, an image of the earth as an entire sphere. This view of our home planet had never been captured before.

The Artemis I mission was the initial test in a program to return humans to our closest celestial neighbor in this decade.

As we close out 2022, taking a few moments to reflect on what humans achieved fifty years ago as well as the excitement of our attempt to go back to the moon cuts through the tremendous polarization and division in the world today.

If we can put humans on the moon with 1960s technology, we can certainly solve some of the pressing issues facing us as we enter 2023. 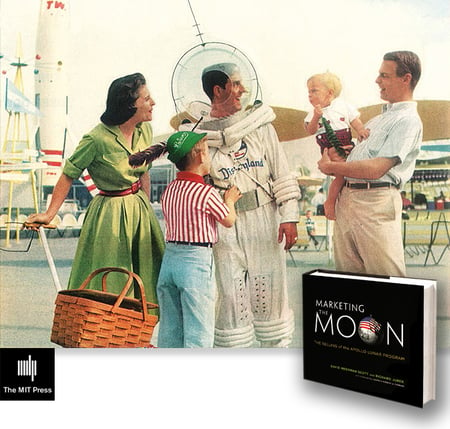 As I argued in the book I co-wrote with Rich Jurek Marketing the Moon: The Selling of the Apollo Lunar Program, the Apollo program was one of the most successful public relations campaigns in history. It featured heroic astronauts, press-savvy rocket scientists, enthusiastic reporters, deep-pocketed defense contractors, and Tang.

In July 1969, ninety-four percent of American televisions were tuned to coverage of Apollo 11's mission to the moon.  How did space exploration, once the purview of rocket scientists, reach a larger audience than My Three Sons? Why did a government program whose standard operating procedure had been secrecy turn its greatest achievement into a communal experience? These are some of the subjects we tackle in the book.

Rich and I were fortunate to have interviewed more than half of the men who walked on the moon for our book and Gene Cernan, Commander of Apollo 17 whose steps were the last on the moon 50 years ago this week wrote the foreword to our book.

As we close out 2022 with the successful Artemis I mission, it’s worth reflecting on what we humans can achieve.

If we can put humans on the moon using 1960s technology, we can solve the climate crisis and fix the disastrous effects of social media algorithms on the world.

Here are a few excellent ways to learn more about the marketing aspects of the Apollo program. If you have some free time this holiday season, perhaps you might dig in.

My friend Douglas Burdett, host of The Marketing Book Podcast, interviewed me for an episode that dropped this week. We talked about the legacy of the Apollo program as well the fascinating marketing and public relations aspects of the effort. Tune in here.

To coincide with the 50th anniversary of the first lunar mission to land on the moon back in 2019, the film Chasing the Moon, a 3-part PBS American Experience mini-series was released.

The series was loosely based on our book and I served as a contributing producer. The series, produced and directed by Robert Stone, recasts the Space Age as a fascinating stew of scientific innovation, political calculation, media spectacle, visionary impulses, and personal drama.

Onward to 2023, what audacious project can we put our collective minds to?