I wanted a beta version of Glass because I see some great uses in public speaking and wanted to test drive as quickly as possible. I’ve now had two experiences to use it live: at an event I spoke at for the National Association of Elementary School Principals on Sunday and today at KC IABC Business Communicators Summit.

Here are my thoughts after a week of playing and two live gigs.

Set up and getting started

The process of getting going takes some time. Don’t expect it to work right out the box – it takes some work to set up. I created a mobile hotspot on my iPhone, which I then tethered to run Glass. This was a bit of a hassle, as I had to contact my wireless provider to upgrade my plan to include a personal hotspot. Glass also works when connected to a WiFi network and there is an iPhone app that you use to connect and then use glass to scan a QR code. 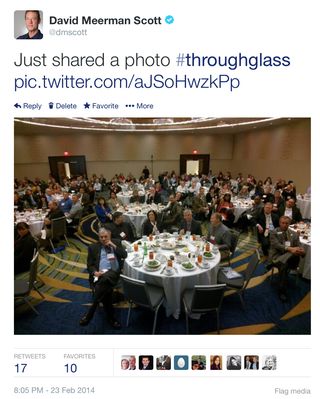 It took me a while to figure out how to set up Twitter for Glass. The issue for me is that I didn’t want to use the defaults because I would get way too many updates, so I had to figure out how to get all the Twitter mobile settings right to only get mentions of my @dmscott Twitter ID.

Fortunately, the Explorer Program includes exclusive forums where lots of helpful people (some from Google but most other Explorers) jump in to offer advice and answer questions. I quickly found a thread started by Randall Wong that walked me through setting up Twitter on Glass. We then connected on Twitter and @randallw provided more helpful advice.

Although it took several hours of mucking about, for a product in beta I found it fairly easy to set up and learn how to use Glass. Here’s a very good review of Glass on gizmag if you’re looking for much more on set up and use.

Sharing a photo of the audience

It took just four seconds to use Glass to take a photo of the audience and share that photo via Twitter. This was awesome! I like to do something real-time while on the stage. Previously, it would take a minute or more to use my iPhone to get a photo out.

While my photo Tweet did not have custom text, nor did I add the hashtag for the events, I found “Just shared a photo #throughglass pic.twitter.com/aJSoHwzkPp” to be just fine as audience members quickly found the tweet and RT’d it with the hashtag.

For me, that one feature alone had a nice real-time wow factor with my audience.

While doing some Q&A today, I was watching the Twitter feed to see if any questions came in. Indeed Paul Arnhold tweeted a question and I was able to see it and answer.

Glass has tremendous promise as a way to monitor the twitter feed from the stage (better than using a screen because I can be heads up). But I haven’t yet figured out how real-time it is. I'm not sure if it is up to the second or only up to the minute. In real-time Q&A this is a huge difference. I’m going to keep experimenting with this aspect.

Use as a confidence monitor

What I really want to do, which I don’t think is yet possible, is have an image of the slide that I am currently showing on the screen to the audience pop into Glass in real-time.

I’d like to use Glass as my “confidence monitor” (hate that term). My style is lots of image slides with almost no words. I’ll show 150 slides in an hour sometimes. So having the image of the current slide in Glass means I can walk the room and always have the current slide in view.

I spoke with Google about this and they suggested a hack involving pointing my iPhone at the screen and broadcasting that in a Google Hangout that I could connect to on Glass. But that idea sounded dreadful. I can’t imagine it would be real-time enough. I hope an app developer creates something to solve this problem.

For more ideas on using Glass for public speaking check out Nick Morgan’s post I Have Seen the Future of Public Speaking and It Is... 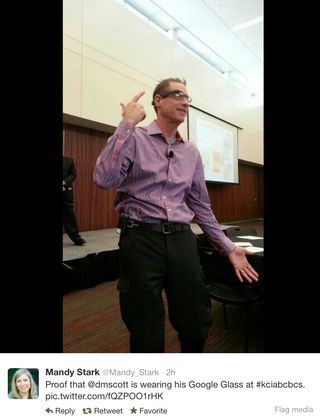 As I was wearing Glass, I wondered how much wearing this futuristic device detracts from the talk? Are people paying attention to my information? Or are they wondering about that damn thing on my face?

There is certainly a Glasshole factor at play, but how much? At the NAESP gig I had Glass on for just a moment and at KC IABC I wore Glass only for the 20 minute Q&A session and not during the 75 minute keynote.

I’m sure that over time as wearable technology like Glass becomes more mainstream, there won’t be as much of a weirdness factor. I was listening to a BBC radio interview this week (I don’t recall who was being interviewed) about the parallel between the development of timepieces and computing devices. I like this as a way to look at what’s happening:

At first clocks were really big things in public places. Then a smaller home version was developed that the average family could afford to put on their mantle. Soon after affordable clocks got smaller and then people carried pocket watches around. Soon watches got even smaller and started appearing on people’s wrists. And now timekeeping is embedding in lots of other places like your phone and your car and so on.

Same with computers—they went from room-sized contraptions to big clunky home units to smaller notebooks to a computer that doubles as your phone. And now computers are appearing that can be worn on the head and on the wrist.

So over time, just like a wristwatch and a smart phone, people will become used to wearables and there won’t be as much of the weirdness factor. But for now they are still uncommon.

Google Glass is clearly early days. Think back to the first iPhone 1.0 release and imagine what that offering was like in beta and you’ll get a sense where Glass is. In particular, there are only a handful of apps, a problem I’m sure that will be solved going forward.

A huge issue is that Glass battery life stinks. I’ve found it to drain after just an hour of use. So that needs to be fixed.

When getting used to the interfaces—the trackpad on the side and the voice commands, it’s easy to make mistakes. I accidently sent a photo to someone I hadn’t communicated with in years and I accidently replied to a tweet without knowing it. I wonder what we’ll call a buttdial with Glass? ButtGlass?

However, the biggest problem I see so far is that Glass is tied to all your Google accounts—Gmail, G+, Google Search, and so on. It works great if you live in Googleland. But there is an islands mentality at play here because the product doesn’t work as well with other email accounts and other social networks.

I see big promise for Glass (or a similar product from another company) helping me to present better and for my audience to have a better experience as a result. I look forward to continue to test and experiment and see what happens.