Proof that you can succeed at Newsjacking too

Several months ago I connected with Trent Silver, a young Internet entrepreneur, who wanted to test some of the ideas I talk about in my free World Wide Rave book and in my Newsjacking book.

Trent has been building Web businesses since he was a 15-year-old high school student(!!). He's 22 now.

I thought this would be a fun experiment so I waited for him to get back to me with a success. It didn't take long! 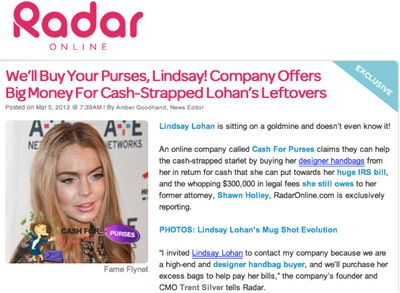 One of Trent's businesses is Cash for Purses, where he serves as CEO. Cash for Purses finds new homes for high quality designer purses and handbags (brands like Gucci, Prada, Hermes, Chanel, etc.), generating cash for the former owners.

In the past few days, Trent has enjoyed a barrage of press because he tied his business with cash-strapped but designer bag laden starlet Lindsay Lohan. Trent recognized that Lohan is sitting on a goldmine and doesn’t even know it! So he crafted a pitch to celebrity Web sites that cover Lohan, saying that his company would purchase her extra handbags to help her pay her bills. He even offered to donate his profits to charity.

Trent understands that celebrity sites are always looking for exclusive stories, so he pitched the top sites first. Since Lohan's financial troubles have been in the news, that was his newsjacking hook. Radar ran with it: We'll Buy Your Purses, Lindsay! Company Offers Big Money For Cash-Strapped Lohan’s Leftovers.

Once the story was out, other sites started to pick up on the resulting buzz including Huffington Post: Lindsay Lohan Offered Money For Used Handbags By Fundraising Company and the Inquisitr: Lindsay Lohan’s Purses May Be Key To Financial Freedom.

Interestingly, people who read celebrity sites seem to also be people who want to sell their purses because since the story broke, Trent has received several hundred new leads from people ready to sell their designer bags.

Interestingly, people who read celebrity news sites seem to also be people who want to sell their purses. In the weeks after the story broke, Silver received 8,000 new leads from people who visited Cash for Purses ready to sell their designer bags. “I was able to close 19 percent of the leads,” Silver says. “And it brought in almost $250,000 worth of bags. This has also helped me to get to the top page of Google for any searches related to selling purses.”

Soon after the online media outlets ran the story, Silver began receiving inquiries from other publishers, resulting in a full-page story in Essence magazine and a television mention on the Katie Couric show. This publicity led to more people visiting the Cash for Purses site and more business for Silver.

"I've found it helps to have a legitimate position to take when going to the media," Trent tells us. "I really want Lindsay Lohan to sell me her purses. I really want to donate the same value of all her bags to charity. It's not a publicity stunt, it's a real offer."

Trent is a news junkie, so he enjoys looking for something interesting in the news that he can tie his business to. "I read voraciously because I know that I have to get the word out for my businesses in a way that people will understand," he says. "I make sure I am up-to-date on what's going on in the world to see if somehow I can align my businesses in a positive, interesting way. It's definitely an art and a science."

Since Trent runs his own business, he has the luxury of being able to put the word out without getting multiple approvals from people in the organization. If you run your own business too, take his advice.

But if you work at a larger organization, don't use that as an excuse, you can still get buyoff from others to generate interest in your company and its products.

"Don't be afraid to try something different," Trent says. "Different gets noticed. If you don't get noticed, you're not doing your job."

Thanks for sharing with us, Trent. Keep up the great work and let us know about your next success. 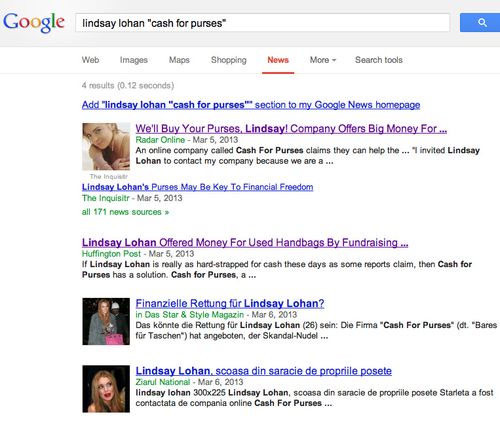