Amanda Palmer freaks out to celebrate hitting $1 million on Kickstarter 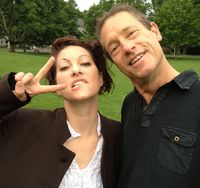 Yesterday evening, I met up with Amanda Palmer (together with my friend Steve Garfield) on Lexington Battle Green.

We filmed a video that I'll be using in an upcoming presentation and which I'll be sharing here in the future.

The timing was awesome as just a few hours before we met, Amanda's Kickstarter for her new album Amanda Palmer and the Grand Theft Orchestra passed the $1 million dollar mark.

Here's Amanda celebrating her milestone which is the largest amount ever raised for a music project on Kickstarter.

I wrote about her new project when she launched a month ago in my blog post We are the media: Amanda Palmer and the future of your business.

There are now over 21,000 backers, including me, Steve, and many of our social friends including Denise Wakeman. I'm looking forward to Amanda’s Boston art opening and concert. If you go to the Boston event, let me know.

Imagine that. Tens of thousands of Amanda's fans backed her new album before they even heard it. That's the power of a fan base and using social media to connect with fans.

One way to do an album is to have a record label fund it. As Amanda shows, there’s a better way: Have your fans fund it and then you retain control.

Amanda Palmer site (where you can get a free album preview track).
@AmandaPalmer on Twitter
Amanda's Kickstarter