Written by David Meerman Scott on May 6th, 2012

UPDATE - May 9, 2012 - Alison from @Acura_Insider commented (the 22nd comment down). Please be sure to read her explanation about what happened as you consider this story.

I tweeted her back using the #JazzFest2012 hashtag.

This linked to a PURL that offered me a VIP experience at Jazzfest. (In case the PURL has been removed by the time you read this, I have reproduced it below).

Checking the @Acura_Insider Twitter ID, I note that there are hundreds of people who received such a spam message directed at them. In fact, the account is in broadcast only mode. There is no interaction at all, no humans involved. For the past two days the account has been generating hundreds of examples of this nonsense. (I have included a screenshot below).

This is spam. Plain and simple.

Just to be sure, I tweeted back to @Acura_Insider and got nothing. It would appear that nobody is monitoring their feed (heck it's a weekend, why would they be checking Twitter).

I'm not at #JazzFest2012 and anyone can see that from my tweet back to Renee.

I'm sure Acura spent a boatload of money sponsoring Jazz Fest. And they probably paid an agency a bunch of money for this campaign.

Actually, this could have been an interesting use of Twitter had a human been involved. I go to music festivals and it can get hot and I can get tired. If I tweeted that I was tired at #JazzFest2012 and then I got a tweet back inviting me to the VIP area, I would be kinda psyched. I might have taken them up on the offer. Then if I enjoyed it I would have talked it up. That would have worked.

But this machine-generated stuff is not a good way for Acura to generate attention. The negative feelings of those who are spammed far outweigh the good vibes of Acura being onsite.

What do you think? Have I over-reacted? 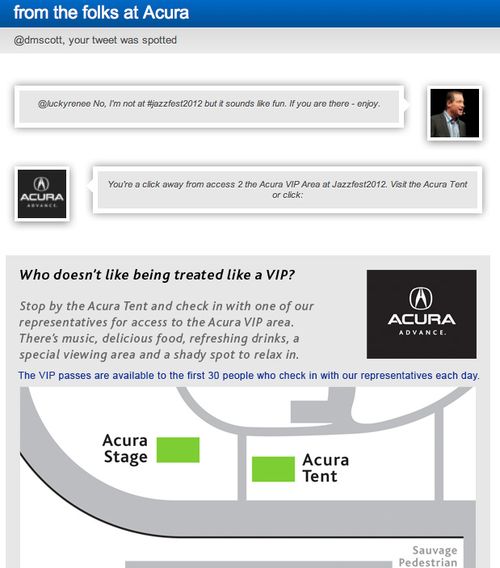 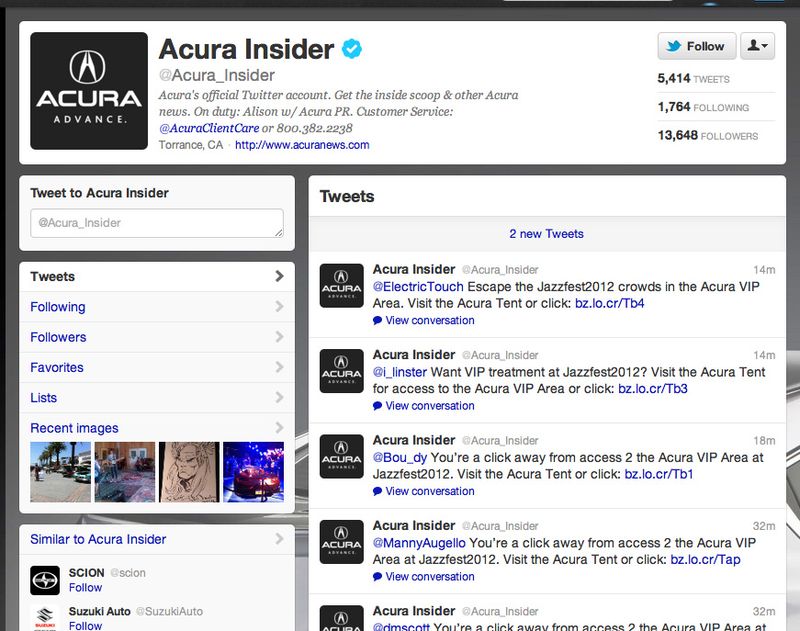