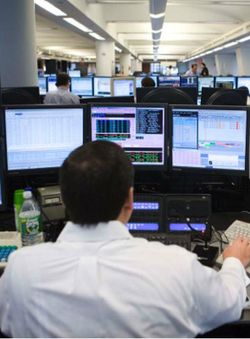 When I worked my first job on a Wall Street bond trading desk, I was fascinated by financial arbitrage, one of the ways that traders made money.

This technique involves taking advantage of a temporary price difference in two or more markets and is usually executed by simultaneously buying and selling the same security. A pure arbitrage involves nearly zero risk.

For a simple example, imagine the price of gold is at $1,600 an ounce in London and at the exact same time it is $1,620 in New York. A trader could simultaneously sell in New York and buy in London to lock in a $20 profit. (This simple illustration ignores risks and transaction costs).

I've used what I sometimes call "content arbitrage" for years. Adapting the definition from the financial markets, content arbitrage involves finding information in one place and revealing it in another to take advantage of temporary differences in the knowledge level of people in those two markets.

We've all experienced content arbitrage in action. You're at your desk when somebody walks in and says: "Did you hear...?" and proceeds to tell you about the competitors' new product, or the CEOs resignation, or an earthquake, or a some other important information. One person learned the news and told another.

But when it involves publishing that content as a form of marketing then content arbitrage gets really interesting. Here are some examples:

You're quietly checking out Google News while at a conference and some breaking news about your industry crosses the wires. You immediately grab the URL to a story and post it on Twitter using the conference hash tag. You "buy" the content on Google News while everyone else is paying attention to the speaker and then "sell" it by tweeting it to those who do not yet know about that news. The benefit for you is that you're seen as knowing things quickly and you'll get noticed (and re-tweeted).It's great for your personal brand.

Or you're watching television and an industry expert says something remarkable or controversial. If you blog about it right away, you're the first to share with the wider marketplace who had not been watching.

Content arbitrage, by definition, exploits temporary differences in knowledge levels. So you've got to be really fast when you jump in. Soon everyone will know the big news and if you wait too long to blog or tweet you look silly if people already know.

It's all about real-time. The more you dilly-dally the more the market for that information becomes stable again (when everybody knows the news already).

Straying into someone else's market

Content arbitrage also occurs when people stray into each other's territory on purpose to exploit simultaneous differences in information markets.

How about this: Ask kids what's hot in school and why. Listen carefully to what bands, movies, social networks, and other things are all the rage. You may have information that you can exploit in another market.

Or this: Watch for news releases from government agencies. You can sometimes spot an important development in your market that people aren't yet aware of. If you're first to blog it or explain what it means on a short video, you can effectively newsjack that release and have your industry's media quoting what you said in your blog or video. Not to mention the positive exposure you get to your existing and potential customers.

Bringing this idea back to the financial markets, smart traders use content arbitrage to read beyond the financial newswires on their workstations, looking for emerging trends within publications read by the general public.

By the time news appears on the wires it's already too late. They might read Seventeen Magazine to learn about a hip fashion craze or Shape for the diet trend of the month. Even more interesting are those who lurk in chat rooms and read blogs for the nuggets of information that haven't yet hit mainstream publications. If you were the first to buy beef futures because you spotted an emerging low-carb diet trend before the financial wires wrote about it, you cashed in big time. Any time one information market (say the financial newswires) says one thing about a topic and the blogs and chat rooms reveal something completely different someone can profit. Cool—people actually get paid to do this.

But there's a catch. With all forms of arbitrage, the potential to profit only exists as long as there's an exploitable difference between simultaneous markets. It is a real-time idea.