This morning my Australian friends lit up Twitter talking about an epic Twitter #fail from Qantas Airways. I saw messages from Trevor Young, Jim Stewart and others pointing me to what was the top trending topic in Australia today. 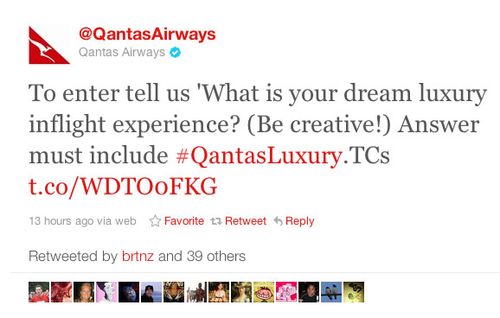 Turns out the Australian airline announced a contest on Twitter.

Most times a contest like this would be just one of thousands that populate Twitter at any one time. Normally there would be no backlash.

The reason this blew up is due to terrible timing. In the past month, Qantas had faced a major strike, which grounded the fleet and has experienced ongoing disputes with the unions that represent pilots, mechanics, baggage handlers, and caterers.

The travelling public was greatly inconvenienced during this period of turmoil and cancelled flights. I had friends who couldn’t make it to America for long-planned meetings because of the strike.

The frustration was taken out by people who used the #QantasLuxury hashtag to vent their frustrations. Here are a few I found:

@2FBS: #QantasLuxury is dressing your staff in t-shirts that say "We're Sorry" and believing that makes up for missing a friends funeral.

@GrogsGamut: #QantasLuxury - when the passengers arrive before the couriers delivering the lockout notices do

@mrpaulb: #QantasLuxury is having gold plated taps in the bathroom where some poor qantaspr person is throwing up right now

@indednsible: #qantasluxury is when they enforce 11 hours of artificial night on the MEL-LAX flight, and hand you a plastic bag full of junk-food.

@Ivalaine: #qantasluxury having your bags "misplaced" not just at arrival after 28 hours of travel. but then "misplacing" them again when you get home

I've learned a bunch of things from this.

1) Timing is important. If you are dealing with sensitive corporate issues, you should think carefully before implementing a fun campaign.

2) When you offer people a chance to use a Twitter hashtag, they will. But you don’t have any control over what they say. You need to be prepared for negativity.

3) The prize in this contest was lame. You get the amenity kit that first class passengers get. Big deal – some PJs and a toothbrush. If you want to do a contest right, offer a really valuable prize.

4) As I’ve talked about many times, in a real-time world news jumps quickly from social media to mainstream media. As of this writing, there are well over 100 mainstream media stories about this. I’m sure there will be many more.

5) Anyone seen a newsjack of this story yet? 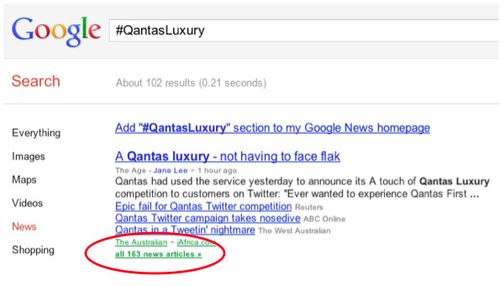