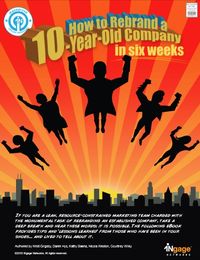 UPDATE January 21, 2011. INgage Networks has completed the revision of the ebook which is now available on their site using the links below.

UPDATE - January 11, 2011. INgage Networks is working on a new version of the ebook (see comments below). For now it is unavailable. 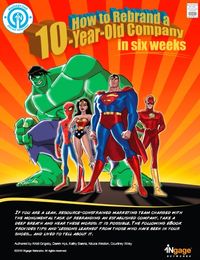 Many companies go through the process of re-naming and re-branding and making all the associated changes that go with it. But the people I've spoken with who have done so usually feel they are ill prepared for the challenge and don’t know what to expect.

Here's a terrific ebook written by the marketing team at INgage Networks that captures their learning as they went through a recent rebrand. It is a fun and engaging story. If you're considering your own rebranding effort, check it out.

Download the free ebook:
How to rebrand a 10-year-old company in six weeks

"We're considering rebranding the company. Give us a proposal and your recommendations."

The prior name, Neighborhood America served the company well. But as the company grew, the name began to feel too small.

The ebook tells the story of how the marketing team took an aggressive approach that involved tight deadlines, minimal resources and limited budget. This ebook is written from the trenches and is very practical.

Download the free ebook:
How to rebrand a 10-year-old company in six weeks

Disclosure: Several years ago I delivered a talk to the team at what was then called Neighborhood America.