David Letterman gets in front of the news 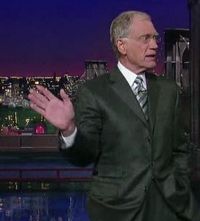 American television personality David Letterman used his Late Show on October 1 to confess to an extortion attempt from someone threatening to expose affairs that Letterman had with staffers.

I'll leave commentary about the tawdry aspects of this to the thousands of other people who are weighing in with opinions on the sex angle. However, I do want to comment on the way that Letterman has chosen to handle the disclosure.

Getting in front of a media crisis

The public heard about the affairs and the blackmail attempt from David Letterman himself first. Letterman delivered a deadpan description of the extortion, admitting that he had sexual relationships with women who worked for him. Letterman was not married at the time of the affairs.

It seems obvious that Letterman expected the news to come out somehow. His choice of admitting it himself first, on his own terms, and in his own environment of his top rated television show was a brilliant move.

Again, I am not condoning the behavior nor am I dismissing it as unimportant. However, I am saying that if bad news was going to come out anyway, it is much better that the person involved admit it first and this is a great example.

All the elements: Sex, celebrity, greed, shame, and lies

This story has all the elements that news outlets love: Sex (especially sex when one person is deemed more powerful than the other), celebrity (especially when the celebrity is someone who frequently talks about other people’s sex lives), greed (especially involving millions of dollars), shame (ducking the cameras), and lies (denial, which is usually the first course of action).

Because Letterman admitted to the affairs, much of the early news has focused on the extortion attempt.

Letterman took out the shame aspect (because he was not featured in those famous ducking the cameras in front of your house shots), and he removed the lies aspect (he did not deny the allegation as so many people seem to do initially). By admitting to the affairs, the shame and lies fall on the alleged blackmailer instead.

With shame and lies out of the picture and because the news originally came directly from the main person involved in the matter, Letterman controlled the initial framing of the discussion as being about extortion more than about sex.

I give credit to Letterman on the PR side so far. Of course, it is early. This story will continue to unfold and it is likely that there will be new revelations.

Many organizations face potential bad news being exposed to the public. Product defects, layoffs, injuries on the job, or a social media transparency screw-up (such as getting caught faking product reviews) are just a few examples I’ve seen recently.

From my experience, jumping in front of the issue is usually the best course of action.