Positioning magic at the top end of the market

On Saturday I enjoyed an evening of very intimate magic—a showcase of modern conjuring—by Steve Cohen, the "Millionaire’s Magician". 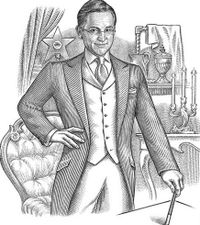 Steve's story is a fascinating example of personal branding success with exclusivity as a market position.

Steve doesn't advertise his Chamber Magic shows. He doesn't sell his services. It's his positioning plus word of mouth (and word of mouse) that gets him attention and selling out his shows many months in advance.

He performs on weekends in a beautiful, private suite in The Waldorf Towers. His guests arrive in cocktail attire making the performance feel like a trip back in time. (See the video below for a taste of the show).

Mark was perfect because he not only is a positioning guru, but also a magician (he has co-written Magic for Dummies and the positioning and communications book How to Persuade People who don’t want to be Persuaded). Mark and Steve talked over the course of a month about how to develop a unique position in the crowded market for magicians.

Amazingly, no magic performer was in the exclusive space. Other performers were billing themselves as the funniest, or the edgiest, or the flashiest, or the coolest. Or adept at performing at trade shows, or at parties, or for children, or at functions, or they were the best at a specific kind of magic. But no one was focusing on the ultra high end.

With the new positioning, Steve Cohen was able to raise his private fees by 2,000% (yes, you read that right - he raised his fees two thousand percent) and he has been hired to perform at events for people such as Martha Stewart, Michael Bloomberg, the Saudi royal family, and Warren Buffet.

Of course, not everyone can be exclusive. The vast majority of magicians perform at children's birthday parties and county fairs.

How about you? Does the top end of the market appeal to you? Is it a position you can own?