The U.S. Air Force and social media: A discussion with Colonel Michael Caldwell

On Wednesday I delivered a presentation at the United States Air Force World Wide Public Affairs Professional Development Conference. The Worldwide as they call it, is a chance for everyone who works in public affairs (PA) to get together to share ideas and learn what others have been doing by discussing communication techniques that run from traditional media relations, to partnerships, to Combat Camera and Defense Visual Information.

A big focus this year was New Media Tactics and you can see some of the discussions on Twitter.

Prior to my gig, I had a chance to sit down with Colonel Michael G. Caldwell, acting director of public affairs for the United States Air Force to discuss social media. Colonel Caldwell blogs at From an Air Force Colonel.

I was impressed with how deeply the smart people at the Air Force have thought about social media and how quickly they have jumped in. I hope that people from all organizations, particularly executives in large corporations who are often fearful and dismissive of social media, can learn from Colonel Caldwell and the examples here. 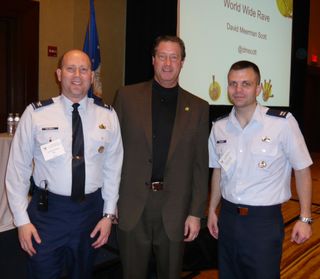 "We want 330,000 people to be in Public Affairs," says Colonel Caldwell. "Everyone has friends and peers and family and they are communicating with them online. But it is a major cultural change for the U.S. Air Force and I don't want us to get left behind. The game is changing."

Colonel Caldwell says that two years ago they weren't thinking about social media. Now social media is very much on the minds of all 350 or so public affairs officers in the Air Force.

"So far, this is much of a fact-finding exercise," Colonel Caldwell says. "We know these are a valid communication tools, but how do break in? We want to learn and understand the culture before we can really propagate."

The Air Force faces communications challenges that the vast majority of organizations don't have to think about. National security for example. And life and death. The Air Force has 15,000 networks and seven million IT devices (such as computers) and all need to be protected because national security is at stake.

Interestingly, Colonel Caldwell shared that some of the most efficient sensitive communication is in secure Twitter-like chatrooms with short messages on private channels. "You can't communicate with a fighter pilot using lots of wordy language," he says. "Airmen are already used to the sort of short communications popular in social media."

What I find particularly interesting about the Air Force is the amazing possibilities for creating valuable information online. Hey, we’re talking about fast jets here! A good example is BlueTube.

Colonel Caldwell agrees: "We want to inspire leadership at all levels to embrace change and be a part of the solution," he says. "I want our guys going out there and talking about how their day went, either bad or good. The fact that young people in the Air Force are involved in multi-million dollar equipment is mind-blowing to people outside of the Air Force. And when people talk about what they are involved in on places like Facebook, it is more effective than a slick over-produced video." 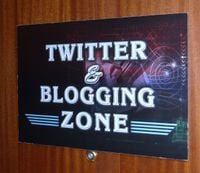 I also had an opportunity to spend time with my friend Capt. David Faggard, Chief of Emerging Technology. Alert readers of this blog may recall that I interviewed Capt. Faggard late last year on this blog. I popped into Capt. Faggard's New Media Tactics and Assessment session, which was held in the "Twitter and Blogging Zone."

At his session, Capt. Faggard released a new book and video his team created, both entitled New Media and the Air Force.

A personal note:
I have been volunteering my time to work with the United States Air Force. I did not serve in the military when I was younger but have always admired those who do serve.

I am thrilled that my specialized knowledge can be put to use to help the Air Force and our country and I have thoroughly enjoyed the opportunity to work with such talented and enthusiastic communicators and consider this opportunity to be an important highlight of my social media work.