The smart folks over at HubSpot released an interesting State of the Twittersphere report for Q4 2008.

I'm a big fan of Twitter and as of this writing, I have 4,346 followers to my feed @dmscott on Twitter, way off to the right of this chart. As people choose to follow me, I've learned a lot about Twitter and marketing because I spend a moment looking at each follower. 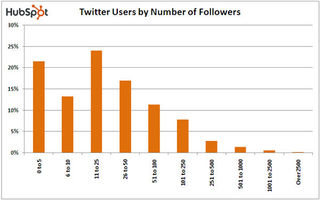 Many marketers have now discovered Twitter. That's a good thing. And many marketers are using Twitter in very interesting and useful ways. However I'm seeing more and more Twitter feeds created not with a person's name "Mary Smith at XYZ Company" but instead the feed is created with the company name instead "XYZ Company." There are also a lot of Twitter feeds from causes, religious groups, nonprofits, organization, sports teams and the like. While I am okay with that under certain circumstances (like using Twitter as a way to say that the club meeting is cancelled because of snow), I am not a fan of Twitter feeds from inanimate objects without a person behind the feed.

For example, today I was followed by @acne__ Yes, that acne. Like in teenagers. The site associated with the acne Twitter feed is Best Acne Treatment, a products site. While I'm sure acne is an important issue, what the heck does it have to do with me? And should I follow Acne back?

While I'm sure that some people may want to follow their favorite company, nonprofit, or group, I'm seeing many of these feeds as a derivative of spam because they just prattle on about their products and services all day.

I predict that in 2009 there will be a backlash against company Twitter accounts and either the Twitter community will need to self-police or the good people who run Twitter will need to make rules.

It may be tough to do, but I wonder if Twitter Grader or the next State of the Twittersphere report can identify the ratio of real people on Twitter vs. inanimate objects.

For more about Twitter as a marketing tool for their business, check out the HubSpot webinar How to Use Twitter for Marketing & PR.

Disclosure: I am on the HubSpot board of advisors.