Marketing 1-2-3: 1) Find a problem to solve 2) Build a product that solves it 3) Encourage your customers to tell your story

I've been surfing for nearly 20 years: Bodyboarding, bodysurfing, and longboards mostly. This year my daughter clearly passed me in standup surfing ability (she's 14). I really enjoy the ocean and waves, it is so relaxing and fun. Because of my speaking business, I also end up at some fantastic surfing spots and try to arrive a bit early or stay late and get in some rides. On business I've been to Sydney, Australia many times, Hawaii, Bali, up and down the California coast, Miami, and other places with waves.

A few days ago we had some good rides at Easton Beach in Newport, RI and we wished that we had a camera. So today I was looking for a waterproof digital camera so my daughter and I could shoot some surf photos. I was totally expecting to get some bulky and difficult to use unit that was designed for scuba divers.

Instead I discovered a case study of a Tuned In company that follows the easy 1-2-3 steps of marketing.

1) I was thrilled to find the GoPro Digital Hero 3 camera. If you look on Amazon for waterproof digital camera as I did, you'll see that most of the others look the same. Then you come to the GoPro model. As any surfer would know, you can’t haul around a standard camera, especially in big waves. This unit fits on your wrist! Perfect. As an added benefit it shoots video too. Cool: Here is a camera for my buyer persona.

2) This product was clearly created with a market problem in mind instead of dreamed up by product designers in a vacuum. When you are tuned in to what problems people are willing to spend money to solve (in my example, someone who wants to shoot photos while surfing) and you build a product that solves that problem, you are on the road to success. The GoPro Digital Hero 3 camera is made by a Northern California-based team of inventors and athletes dedicated to making it easy to use a camera during life’s most exciting moments. Since launching the camera a month or so ago, they have gotten a lot of press. 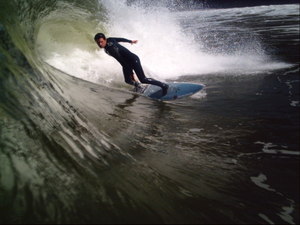 3) The next step, as GoPro also does, is to create a site that showcases the product instead of just throwing some egotistical nonsense about mission statements and product specs. In fact, GoPro encourages customers to submit photos and video to the site and to vsocial.

The GoPro site is a bit clunky. They need many more user-contributed photos, but the product was only introduced a few weeks ago, so I’m sure that with a product like this, more will come very soon. By the way the surf photo here is absolutely not me, but it was taken with a GoPro camera.