Witnessing The Future And Not Recognizing What’s Happening 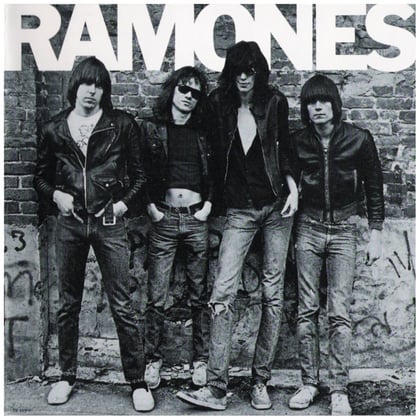 Forty years ago today, on May 28, 1976, The Ramones played my high school auditorium. I was 15 years old and a massive live music geek so I lined up early and sat in the front row.

I didn’t like it. I didn’t get it. I thought it was weird. I didn't realize I was witnessing the future.

The Ramones were too different from the other bands I enjoyed at the time and that had seen live while in high school - acts like like the Grateful Dead, Frank Zappa, Aerosmith, Black Sabbath, Jethro Tull, and Led Zeppelin.

My friends and I laughed about the “1-2-3-4” count off for each two minute song that we thought all sounded the same.

But here’s something really interesting. I remember that 30-minute show like it happened yesterday. It totally stuck with me for forty years. I’ve seen over 600 live bands since then and the first time I saw The Ramones was among the most unforgettable shows of all.

To get a sense of how powerful The Ramones were in their prime, check out the video of their December 31, 1977 show at The Rainbow Theater in London. This show was a year and a half after I saw them the first time and this is how I remember them. Fourteen songs in twenty-six minutes - no time to think! Tommy with the jackhammer beat, Johnny and Dee Dee jumping in the air and doing splits flanking Joey who looked like a question mark with long hair and dark, round glasses. 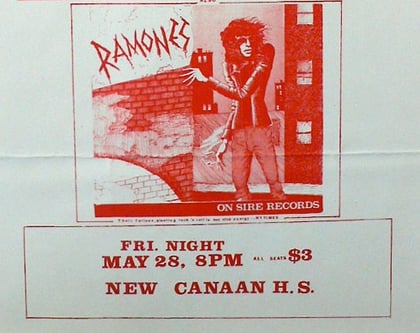 When The Ramones played New Canaan High School, they were on the verge of popularizing punk rock. Their debut album “Ramones” had been out just a month and they were building their audience.

My research suggests that New Canaan High School was just the fifth show for the band outside of New York City. Ironically, it seems this was the only high school they ever actually played despite a few years later starring in the movie Rock & Roll High School. The Ramones earned just a few hundred dollars for the New Canaan High School gig -- as the opening act of a forgettable cover band.

The poster from the show is now worth something like a thousand dollars because it is one of the earliest Ramones concert posters according to the band's first manager, Danny Fields. I remember dozens of these posters around the school and damn I thought I snagged one! I can't find it though.

The difference between what The Ramones were doing compared to other bands – what I thought was weird and didn’t get - is what made them great. I just didn’t realize it at the time. Isn't that true of anything that's radically new and different?

The Ramones are often cited as the first band to define the punk rock sound. They were inducted into the Rock and Roll Hall of Fame in 2002. In the April 21, 2016 issue of Rolling Stone (issue 1259), “Ramones” is named the number one Greatest Punk Album of All Time and The Ramones are the cover story of the issue in a fascinating piece titled The Curse of the Ramones. Sadly, all four founding members of The Ramones have died. I wonder what they would have thought of the honors.

Learning from our ignorance

Several years after I first saw The Ramones, after being exposed to other punk bands at college, I became a massive fan of punk and new wave music. I ended up catching shows by The Clash, Talking Heads, Sex Pistols, B-52s, and yes, The Ramones again. By then, The Ramones had become one of my favorite bands. They still are. I listen to them a lot in the car but I need to be careful as I drive.  I have a tendency to speed up because The Ramones are ten miles an hour faster than any other band!

When that new thing comes along, be it new music (EDM comes to mind) or a new app (Snapchat for example), or a maybe disruptive way of doing something (like Uber) it might seem strange at first.

But pay attention to what's new and strange. You might be witnessing the future. Grab on before it’s too late.