The Neuroscience of Fandom, Both in Person and Online 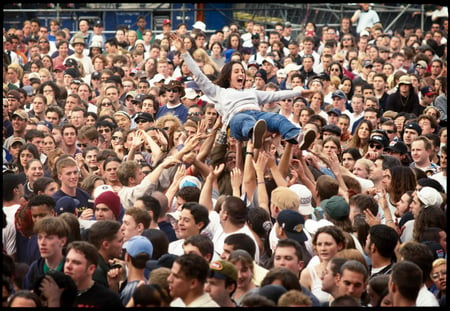 Fandom isn't just for celebrities anymore. It can be rocket fuel for any business or nonprofit that chooses to focus on inspiring and nurturing true fans.

This post, on how to build a fans for your business using the power of in-person and virtual proximity, is based in part on the ideas in my book Fanocracy: Turning Fans into Customers and Customers into Fans.

My co-author (and daughter) Reiko and I spoke with neuroscientists to understand what's going on in our brains when we connect with other people.

We wanted to know — what's really going on when, for example, I'm with my friends at a live music show?

We also researched why social posts that include photos or video of people tend to have much more engagement than plain text of images that don’t include people.

We've discovered a prescription for developing fans of any business using simple but frequently overlooked dynamic in our digital age: physical proximity.

While in much of the world being close to other people isn’t an option right now due to social distancing, an understanding of the power of proximity is important background to the concept of virtual proximity we can build with photos and video.

Building virtual connections to like-minded people leads to success in our business. It’s why so many of us are using tools like Zoom right now.

Degrees of Proximity Make the Difference in How You Connect

What is it about being around other people that drives connection? Why does physical proximity make such a difference? Cultural anthropologist Edward T. Hall has answers to those questions.

Dr. Hall defined humans' use of space in a simple way. As director of the State Department's Point Four Training Program in the 1950s, Dr. Hall's mission was to teach foreign country-bound technicians and administrators how to communicate effectively across cultural boundaries.

His 1966 book The Hidden Dimension describes how people like to keep certain distances between themselves and other people — how our use of space can affect personal and business relations, cross-cultural interactions, architecture, city planning, and urban renewal.
If we want to be effective in our communication, we need to learn how to consciously manage the physical space between ourselves and others.

It's not just a matter of being close or far, or that the closer we get the better it is. Rather, the significance of each level of proximity can be precisely predicted and managed so as to create the most optimal outcomes.

When we’re practicing social distancing as we are as I write this, it simply means that we’re remaining in the public space and social space and not getting into people’s personal or intimate space when we are out of our homes.

The degree of human proximity ties to shared emotion and has an enormous effect on how well we do in business.

Because these basic instincts are so powerful, when we are close to people we don't know, like on a subway platform, we're wary. We can't help that response. It's built into all of us. We're preparing to flee or to fight if presented with any sign of danger.

However, when we are in close proximity to people we trust, when we are with our tribe, a personal connection develops.

People who are able to cultivate physical closeness with customers by engaging with them face-to-face can create stronger emotional bonds.

During normal times when we’re able to interact, the most rewarding encounters in our lives occur in our social space and personal space.

Those people sitting near one another at a game or at Starbucks or standing near each other in a line at a movie theater or a live music show? They're well within each other's social space and as such each person can feel the human connection in a positive and safe, unconscious way.

Building Fans of your Business with Virtual Proximity

So far, we've looked at the importance of in-person human connection in growing fans.
People go to live music for more than the show — they go to enjoy close proximity with other like-minded people. We humans are hardwired to react to those who are nearby. Our evolution has taught us to unconsciously track those who come near us in order to quickly determine if they are good or harmful.

However, how can businesses who can't possibly have a direct personal connection with every fan - either because of social distancing happening as I write this or because your audience is all over the world - achieve similar success?

It turns out that if your product is used by millions of consumers or you run a virtual business or you’re not able to get out, you can still use the power of connection.

Our unconscious brain can respond to what we see as if it is our own experience, even if it is on social media, film, a screen, or a faraway stage through something called "mirror neurons".
Mirror neurons are a group of cells in the premotor cortex and inferior parietal cortex of our brain. These neurons are fascinating because they not only activate when we perform an action — biting into an apple, smiling — but they also fire when we observe somebody else performing the same action. For instance, when those around us are happy and smiling, our unconscious brain tells us we're happy, and we often smile, too.

A critical aspect of understanding mirror neurons is to remember that it's how we're hardwired. It's our ancient brain at work helping us to cope with the world around us. It's not something we can choose to turn on or choose to ignore. It's innate. We can't help ourselves to react in the way that we do.

People unconsciously bond with they see on screens and on-stage because of mirror neurons. This helps to explain why we feel that we "know" movie stars and television personalities. Our brain tells us that we've been in their personal space because of the feeling of proximity to them as we are seeing them up on the screen.

Photos and video of people builds fandom in your business

A deeper understanding of mirror neurons can help you build fans within your organization, or market any products and services you want to sell.

Businesses can use the concept of mirror neurons to build fans in many ways.

For example, consider the humble selfie. 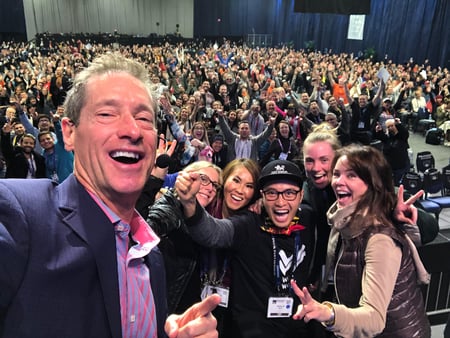 A selfie with more than one person demonstrates something significant to us because of the orientation of our bodies when we snap a photo. While the two (or more) heads are typically well within intimate space, the subjects of the photo are actually facing the same direction. We are in intimate space because we have to get our heads close together. However, because we’re oriented in the same direction, we're aligned. This alignment becomes a powerful expression of wanting the same thing as that other person—even if it’s only for a fleeting moment.

Some see a selfie as frivolous and childish, but that’s outdated thinking.

Selfies are a very powerful and immediate way to share emotion. Imagine if two people who didn’t trust each other were a foot and a half away. If they were facing each other, that would likely feel awkward or like a threat. But, when two or more people face the same direction, such as looking at a camera, it’s acceptable. The humble selfie breaks the intimate proximity barrier! It is safe and enjoyable.

Think about your own social media. If you’re like the hundreds of people we spoke with, the posts that include photos of people shot selfie style get more engagement than text or other photos. 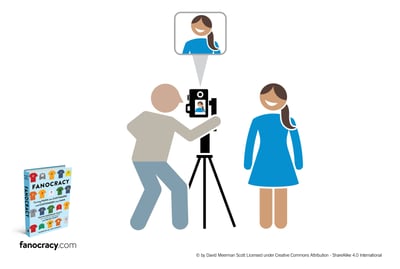 Video is another fabulous way to reach people emotionally though the power of mirror neurons.

In particular, video with people — your employees, customers, and partners — help your customers feel closer to you in a personal way.

You can develop your fandom today by being in close proximity to others and sharing that proximity with other people you can't be near.

In a future blog post, I will provide more details of how to shoot effective videos and how to use video on your site, a video channel, and in social media.

Our gigantic social experiment while sheltering in place over the past weeks means we can compare the difference between interacting with friends on a network like Facebook and interacting with people who are actually sitting next to you.

Yes, photos and video have limitations. But these tools also have incredible power.

You can develop your fandom today by being in close proximity to others and sharing that proximity with other people you can’t be near. Have fun!
Crowdsurf photo by Jay Blakesberg, used with permission.