I love that many of the events I present at at have active social backchannels.

The #hashtags at conferences are now an integral part of how people interact in real-time, moving the content from one-way (speaker on stage to audience) to multi-way (people in the audience discussing the speaker’s topic which brings in their networks around the world).

At some events, the social backchannel has taken on a gamification aspect with people competing for most tweets, most re-tweets and the like. Sometimes teams form to compete. 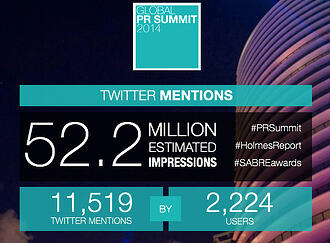 At the recent Global PR Summit where I delivered a keynote, social media partner Lewis PR was onsite with LEWIS Pulse, driving social engagement and measuring the results.

The Global PR Summit had 350 people from 25 countries attend in person but the social engagement reached many times that number of people. In fact 2,224 people tweeted a total of 11,519 times because when the 350 people in the room tweeted, some people in their network interact as well amplifying the real-time discussion way beyond the live audience.

Drive the reach of your live events

Like the Global PR Summit with Lewis PR, the best events feature a team of people dedicated to social amplification and encouraging people to engage via social networks. These social cheerleaders also curate the resulting content.

At the Cisco Partner Velocity event, social networks were made an integral part of the experience.

Unlike most events where the organizers toss out a hashtag and that’s it, Cisco marketing and social media staff built virtual aspects into the entire event to enhance attendees’ experience.

The team created a real-time social dashboard which shows tweets using the #mktgvelocity hashtag in real-time, images of attendees photos, and a leaderboard of the most active people. There’s also a graph of the number of tweets and sentiment analysis (positive vs negative tweets). Great stuff.

Technology to enhance your live event 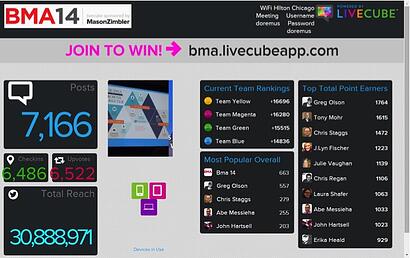 At the recent Caribbean Mix Leadership Conference in Trinidad, I met Aaron Price, founder of livecube, an event app company which was the technology behind the event.

The livecube system includes apps for mobile devices, tablets, and laptops and aggregates people’s social interaction into a dashboard with metrics. It works at corporate events, tradeshows, and conferences to both enhance the audience’s experience and extend the reach of social feeds.

At the BMA 2014 event, livecube drove the social interaction and people could follow the action on the app or on the leaderboards within the hall.

If you run a live event for your company or association, think about how you can drive the social media engagement through gamification.

How To Drive Social Interaction At Your Virtual Event