Preparing for Dark Times: The Total Solar Eclipse of 2017 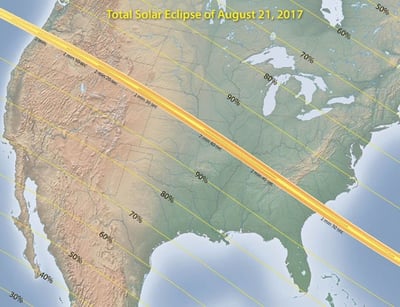 My friend Colin reminded me that there is a total solar eclipse that will be visible in North America on August 21, 2017, just 180 days from now. This will be the first total eclipse of the sun visible on the U.S. mainland since 1979 and the first to sweep across the entire country since 1918.

So naturally I went over to the Google machine to learn more. I quickly found myself on the wonderful site of Eclipse2017.org - established to provide information to news media, elected officials, school administrators and teachers, and the general public as to exactly how to view the magnificent total eclipse of the sun in 2017. The site and its associated @eclipse2017 Twitter feed Eclipse2017 app are maintained by Dan McGlaun, a veteran of twelve total solar eclipses.

I learned all I needed to know about the eclipse, including the path of totality. I’m considering a few options for how to view the eclipse. And I was able to order my own Eclipse2017.org Glasses (and some extra pairs for family and friends) from Dan’s site so we can safely look at the show on the big day.

Newsjacking an event far into the future

Dan’s excellent work on the site and app plus securing an awesome URL clearly involved tons of advance planning going back years. While the 2017 total solar eclipse is not that big a news story now, it will grow in importance so that come August, it will be one of the biggest stories in the American media.

Dan has positioned his organization to be at the center of the news, providing tons of information on the eclipse and how to see it.

But Dan shows us that if you anticipate a major news story years into the future and build your content effectively, you can get you noticed at the precise time that your expertise is in high demand.