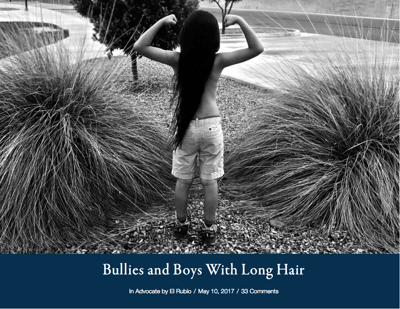 “No child should be denied their education due to the length of their hair,” says Chris Healy, co-founder of The Longhairs. As back to school season kicked in, Chris learned of several boys who were told to cut their hair based on school dress codes. This was just the sort of thing that The Longhairs community advocates for and is an excellent opportunity for newsjacking.

Support for the youngest longhairs

In Mont Belvieu, TX, four-year-old Jabez Oates was barred from class because his hair violates the Barbers Hill Independent School District dress code, mandating boys’ hair must be above the eyes, ears and neck. Another boy faced the same issue at his school. The boys’ situations made the news and Chris is always looking out for situations just like these to share with his community.

Chris wrote on The Longhairs blog in a post titled Should These Boys Be Banned From School?: “While respecting the wishes of all parents, we staunchly believe men and boys should wear their hair however long they choose.

In the case of school policy, we firmly assert that no child, boy or girl, should be denied their education due to the length of their hair. To Habib, Jabez and his parents, we got your back.

Furthermore, we reject the notion of separate regulatory policies for boys and girls’ hair length, which not only reinforce artificial gender roles and stereotypes but could certainly be argued to be hair discrimination or even gender discrimination.”

Newsjacking -- the art and science of injecting your ideas into a breaking news story to generate tons of media coverage, get sales leads, and grow business

This is the perfect sort of story for The Longhairs because the community rallies it's support. As I write this, there are 54 comments on the post.

“For every bully who makes fun of you, or says you look like a girl, or gives you grief about your hair, just know there is a community of tens of thousands of men and boys with long hair right here.”

Newsjacking is a powerful way to generate attention and build community.

Well done Chris and The Longhairs!