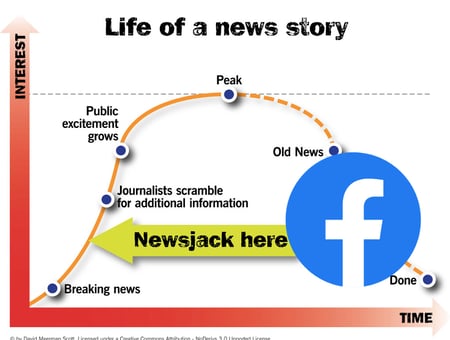 Yesterday Facebook suffered a massive outage across platforms including the Facebook, Instagram, and WhatsApp applications. Into the void came a bunch of people and organizations newsjacking the story.

A company statement says: “its root cause was a faulty configuration change”. At the time, it was the top trending news story in the world.

Newsjacking is the art and science of injecting your ideas into a breaking news story to generate tons of media coverage, get sales leads, and grow business.

Twitter became the social network of choice yesterday and was super clever with a timely tweet that summed up what was happening. But you had to be in the loop with the Facebook outage to get the joke.

Calm, the #1 app for sleep, relaxation, and meditation offered a suggestion for what to do with your time when you can’t be on Instagram.

Instagram and Facebook are down! A good reminder to stop scrolling and take a breather. What will you do? ☕️#instagramdown pic.twitter.com/TLWKyWLhex

Zion National Park shared several tweets of a similar nature to Calm. One said: #SocialMediaDown? Ok, calm down, be cool... don't blow this... Hey, how about that outdoors? Pretty neat, huh? So do you come here often? However, I especially liked several tweets they sent about tweeting (the bird kind).

The reactions weren’t all humorous and weren’t all on Twitter. My buddy Scott Monty curated a Flipboard called The Great Facebook Outage: What We Know So Far that talked about what was happening during the outage in real time. When a news story breaks, if you have expertise in some aspect of what’s happening, you can add context to the story like Scott did.

When there is news in your marketplace reporters and analysts are looking for experts to comment on the story. Newsjacking gets you media attention.

If you are clever enough to react to breaking news very quickly, providing credible second-paragraph content in a blog post, tweet, or media alert that features the keyword of the moment, you may be rewarded with a bonanza of media attention.