What does a small country do to generate attention at a huge global event like the 2021 United Nations Climate Change Conference (COP26) being held now in Glasgow, Scotland? Government and NGO leaders in Panama knew they couldn’t compete the millions of dollars that large and wealthy countries and companies are spending to get their message out. They took a different approach—generating media coverage via Newsjacking.

Panama leaders focused on the intersection two concepts: 1) the importance of climate change for the world’s young people, and 2) the rising sea levels that are directly affecting Panama’s indigenous people.

The lead negotiator for Panama at COP26 in Glasgow is Juan Carlos Monterrey Gómez, who is just 29 years old. He’s the youngest person in history to represent a country at a U.N. climate summit. Considering the success of youth climate activists including Greta Thunberg in getting the world’s attention, having a young negotiator was a bold move.

In his talk at COP26, Barak Obama recognized Gómez: “One of the things I love the most about our work at the Obama foundation is getting to meet young activists from all over the world taking up the baton on climate change," Obama said. "I met people like Juan Carlos Monterrey Gómez from Panama. After representing his country at the Paris negotiations at age 22, Juan then led an effort to amend the constitution of Panama and today he’s here in Glasgow as his country’s climate negotiator.”

The media loved the story of a youthful country representative, with many writing stories, such as this from TIME: The Youngest Negotiating Team at COP26 has a Message for Other Countries. Other media noted the Gomez mention in Obama’s talk such as The Washington Post: Obama, playing ‘hype man,’ tries to jolt COP26.

Geoversity and the Mola Sail at COP26

Geoversity Foundation, an NGO focused on biocultural leadership and with a major presence in Panama worked with the indigenous Guna people to create a massive handmade sail that they would take to Glasgow to bring attention to the effects of rising oceans on the Guna homelands.

I am a member of the Geoversity Foundation Global Advisory Board and have traveled to Panama each year for the past decade to help draw attention to climate change. I’ve spent time with the Guna people and understand the seriousness of the plight. Many Guna families must move from their traditional villages to higher ground and for a people who rely on the Ocean, this kind of move is devastating.

Leading the team working on the Bamboo Ark and Mola Sail project for COP26 are two young Guna leaders, Iniquilipi Chiari, a co-founder of the Guna Youth Congress and of Geoversity School of Biocultural Leadership and Agar Inklenia Tejada, a student of architecture and design associate with Geoversity Design.

They conceived the Mola Sail as a way of both introducing the call-to-action message of the Bamboo Ark and affirming the indigenous perspective of essential oneness with nature. To ensure genuine Guna ownership of the design, they consulted their elders, particularly the chiefs of Guna General Cultural Congress and the Congress of the Guna Nation. Agar then involved the most accomplished designers of molas and, with the help of her aunt and grandmother, assembled a team of 37 women artisans to create the largest Mola ever created in the history of the Guna people.

Months in advance of the departure for Glasgow, the Geoversity team, along with its partner The Citykids Foundation, with its 35-year history of creating large scale global art projects, sought approval to hang the Bamboo Ark Mola Sail somewhere inside of the Blue Zone, the area reserved for official delegates, heads of state, and major corporate sponsors.

“Our thinking was to get it into the inner circle of power during the first few days of COP26 when almost all of the heads of state and super luminaries are there for photo opportunities,” says Nathan Gray, President, Geoversity Foundation. “To ensure success, we had Panama's Minister of the Environment make a formal request of UNFCCC [the UN’s COP governing body]. That was reinforced by formal action on the part of high-level friends in both UN and UK government circles.”

No one in any official capacity even bothered to reply!

“Just hang it! Forget the officialdom!”

Nathan and his small multi-cultural team went to Glasgow anyway.

“The high budget corporate and government pavilions in the sprawling Scottish Event Campus were jammed with extravagant displays and events,” Nathan says.

With no hope of breaking into that scene, the Geoversity team went stealth.

Nathan takes the story from here:

“Panama’s dynamic ambassador to the UK Natalia Royo, already a key ally, decided to pull a New Yorker. She enrolled a relatively low-level official in charge of the delegates services center, a plucky woman from Barcelona, to come up with a way to “just hang it - forget the officialdom”. The little low budget pavilion of the Panama Mission happens to be on the outer edge of the complex across from a 15-meter wall covered in black drapery. The unstoppable Panama-Catalunia duo managed to enroll SEC’s head of installations, a tough Scotsman with a sense of humor, in the idea of taking action and apologizing later. Late in the night of the 6th of November, half time at COP26, the Scotsman procured a cherry picker and four guys to hoist the Mola Sail up over a black sea of drapery. At about two AM, the intrepid Bamboo Ark started its voyage into the deep Blue Zone. As I write these words, there it hangs in all of its colorful glory -not for photo opps with stuffed shirts, rather as a ceremonial gathering spot for Indigenous leaders. Right now, uplifting and culturally rich pictures taken before the Mola Sail are streaming out to countless thousands of places, like Gunayala on Panama’s Atlantic coast and to poor communities on the banks of Amazonian rivers imperiled by extreme flooding and contamination.”

The Mola Sail was selected to be part of the #ProjectingChange projection show directed by Academy Award-Winner Louie Psihoyos that lit up the entire SEC Armadillo, the main COP26 venue in Glasgow. The enormous image of the colorful Mola Sail together with other artists’ work was part of the project’s goal: “World Leaders Aren’t Listening So Artists Get Louder And Illuminate A Pathway To Protect Our Planet”.

The Mola Sail was noticed. The young team was invited as special guests to attend the Vital Signs of the Planet Concert held on November 2, 2021 at the Glasgow Royal Concert Hall. The concert was sponsored by Bloomberg Philanthropies and delivered in partnership with Global Climate Uprising Festival. At the event, the Guna team met with former New York Mayor Bloomberg.

Media outlets like the BBC and many newspapers covered the efforts.

Best of all, the Mola became an unofficial mascot of COP26 with its image broadcast on the massive complex where all the high level negotiators were working. 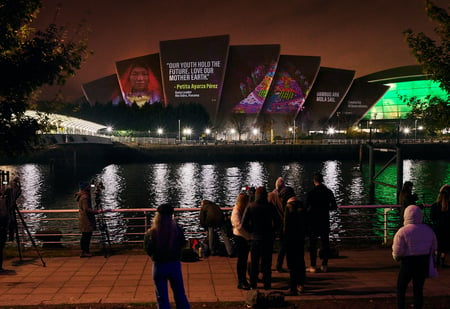 “The Mola Sail represents the origin of my people’s identity as a Guna nation,” says Agar Inklenia Tejada. “It symbolizes our deep caring of our Mother the Earth with its honoring of the sky, sun, sea, earth and of all living beings. It’s the sail that unites us and moves us forward to fight for the forests, rivers and oceans of our Mother.” 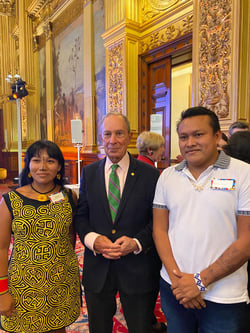 “Our Geo 2030 action agenda is grounded in the hard work of preparing our ocean, riverside and forest communities for the wrenching changes we have to make in the face of a rising sea, flooding rivers, landslides, incursions by loggers and ranchers, and parched forests on fire,” says Iniquilipi Chiari. “We must continue growing stronger in our resolve, smarter in our organization and united in our action with our brothers and sisters of lands close by and far away.”

“We're a raggedy muffin gang here in Glasgow working on a shoestring among corporate titans who are spending hundreds of thousands of dollars to boast about what they're doing to save the planet,” Nathan says. “And on Friday, November 5, 2021, we ate their lunch. We put our hand sewn and heart felt graffiti on just the right spot, on Glasgow’s iconic Armadillo, the main assembly hall for COP26. The voyage of the Bamboo Arks has begun.”

Geoversity’s accomplishments in Glasgow were made possible thanks to an eclectic circle of supporters, including Panama’s creative Minister of Tourism, Iván Eskildsen, COPA Airlines owner Stanley Motta, a member of the Rockefeller family, and fellow Geoversity board member Verne Harnish.

When you’re trying to make an important point, sometimes the front door doesn’t work. Going in the back door instead may be the better way to join the party inside.