How NASA Sold the Science and Glamour of Space Travel 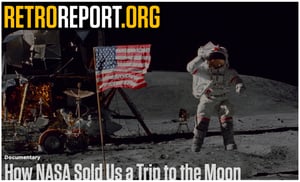 NASA used marketing strategies to gain support for its space missions, leading up to the moment Apollo 11 astronauts landed on the moon on July 20, 1969 (50 years ago today). But soon after, the American people's doubts returned. I’m featured in this really great (high production value) mini-documentary by Retro Report.

I hope you will take 6 minutes to check it out. I believe the marketing aspects of the Apollo missions were as important as the spacecraft and what better day to learn about this than the 50th.

The idea that we wanted to go to the moon is so audacious. It’s also so expensive!

To launch its lunar landing project, NASA had to find ways to convince the American public that the costly, audacious pursuit was essential.

The mini documentary was produced in partnership with PBS, American Experience, to coincide with Chasing the Moon, which reimagines the race to the moon for a new generation, upending much of the conventional mythology surrounding the effort.

The American Achievement of Advertising Apollo

If you really want to geek out about the marketing aspects of the Apollo program, please also check out "The American Achievement of Advertising Apollo", on the NPR Innovation Hub program

This is a 20 minute show that aired yesterday and I am the only guest. Here is a link to the podcast version.

Want even more? Here is a New York Times story The Apollo 11 Mission Was Also a Global Media Sensation.