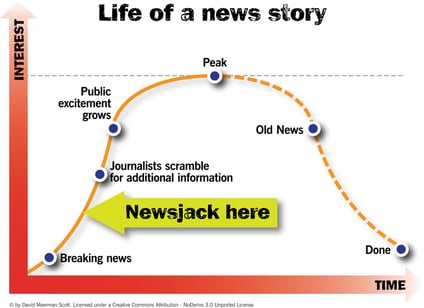 Recently I shared that for the past six months I’ve been working on an online course called Master Newsjacking! In that announcement, I asked if you have any questions or advice for me as I finalize the content of the course.

Wow!  The response was overwhelming. I received well over a hundred questions, ideas, and suggestions on social networks, email, and as comments on the blog post. Thank you! This feedback has helped me a great deal as I’ve been putting the finishing touches on the course.

When I first started the newsjacking movement back in 2011, I focused on the strategy of getting your ideas into news stories. My main consideration was to teach the technique of getting you quoted in the stories being written by mainstream media reporters at newspapers, magazines and in broadcast stories on radio and television.

But as I’ve spoken with hundreds of people who have learned the art and science of newsjacking from me, I realized that many of them were generating sales leads, adding new customers, selling products and services, and growing their business — all from newsjacking!

For example, Trent Silver, a young entrepreneur who learned Newsjacking from me, uses the technique to drive spectacular business growth. “David, after you taught me the breakthrough concept of Newsjacking, I was able to grow my CashForPurses.com business from literally 0 to over 8,000 customers in a little over six weeks,” Trent told me. “This resulted in six-figure revenue in a very short time, as well as major media and venture capital attention.” Read about how just one of Trent’s newsjacking efforts generated $250,000 in new business.

Many other people have shared how newsjacking has grown their business too and I showcase them in the Master Newsjacking! course. In the online course, I’ll show you step-by-step exactly how to implement the ideas of newsjacking.

In Master Newsjacking! You will learn how to:

In a few days, I’ll be publishing a video that provides other examples of people who have successfully implemented the newsjacking strategy. I’ll also provide details about the launch of the Master Newsjacking! course which is coming next week.

Please let me know if you have any more questions or comments as I put the finishing touches on the program! Thanks so much for your interest.