Free COVID Tests is a US Government Program That Works Great 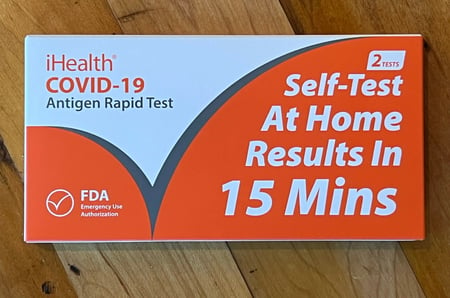 At the turn of the new year, I started following news about the rollout of free at home COVID tests. To be honest I was pessimistic. Boy was I wrong! I think it’s great that the website launched early, works flawlessly, and my test kits arrived much earlier than promised. How cool is that?

It’s exciting to cite the U.S. Government free COVID test program as a technology marketing and communications example of success. I’m planning to include this case study in a future book.

I was sick with COVID starting January 1, 2022, as confirmed by an at-home test that I had purchased months before. I wanted to restock the tests, but I couldn’t find any tests anywhere at the time. I was aware that the US government promised they would send COVID tests free to any household that requested one, but I was skeptical they could deliver quickly.

Remember back in 2013, when the HealthCare.gov website went live to help people find insurance under the newly enacted “Obamacare” law? The website rollout was a disaster. The HealthCare.gov site went down within two hours of its launch due to the high-website demand of about 250,000 users according to MeriTalk, a public-private partnership that provides news and analysis about government information technology projects. 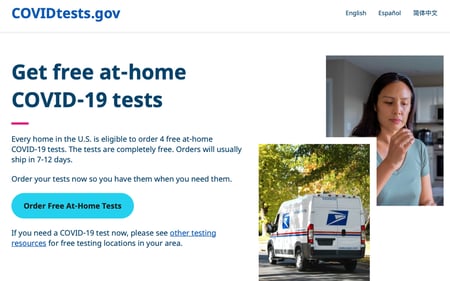 Unlike HealthCare.gov, the CovidTests.gov launch went great. The site was originally expected to go live on January 19 but launched EARLY with a public beta test on January 18.

I learned about the early launch from news reports and visited the site on January 18. I found the site to be super clean and easy to use, and I placed my order quickly. I then contacted my 86-year-old mother who also quickly ordered her free tests. Then I tweeted about it. 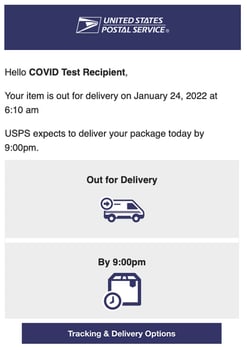 Once I finished the order, I got a confirmation saying that orders usually ship in 7-12 days. I had expected to receive my tests at the end of January.

However, three days after I placed my order, I received an email from the US Postal Service saying: “USPS expects to deliver your package by Monday, January 24, 2022, arriving by 9:00pm.”

The package did indeed arrive yesterday, less than a week after I placed my order!

According to MeriTalk, at times in the past week, the CovidTests.gov website was the most-visited Federal government website, reaching over 700,000 visitors at once on Jan. 18, according to analytics.usa.gov.

If you’re interested in the nerdy architecture and back-end aspects of the CovidTests.gov website, Paul Smith has a great analysis.

Well done! Kudos to the U.S. Postal Service, U.S. Digital Service and all others involved in this project.