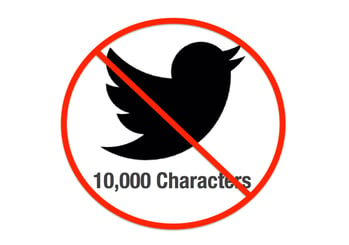 Twitter CEO Jack Dorsey responded by talking about the history of the 140-character limitation (it fit into an SMS message) and how people engage with Twitter. But he also said the company will not be shy about exploring how to “build more utility into the product”.

Twitter has added some great features, particularly the wonderful Periscope. And Twitter Moments is also excellent. But increasing the core functionality would not be a good idea.

Sure you need to grow. But not be copying the other guys so you can be all things to all people.

In my experience, when social networks look too hard at “beating the competition”, they dangerously play with what makes them unique and great because they try to copy the good bits of the competing network. This behavior results in the “island mentality” where the networks think they can do everything and actively shut out the connectivity between their app and other social networks.

At its core, Twitter is a real-time medium. It’s for a quick thought or a fast paced conversation. Hashtags allow us to monitor what is #trending.

Twitter is not ideal for creating original long-form content, although it is a tool for sharing what exists on other sites and networks.