#DawnWall and the Fear of Real Time Media 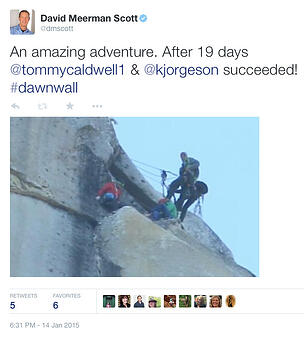 Over the past several days I’ve been mesmerized in real-time by Tommy Caldwell and Kevin Jorgeson as they’ve negotiated the final parts of their 19-day free climb of the Dawn Wall of El Capitan in Yosemite National Park, California.

While El Capitan has been climbed many times, this was the first free climb (ropes only used for safety, not for climbing) of the Dawn Wall - widely considered the most difficult climb in the world. During the entire climb, they communicated to the world and we shared via #DawnWall.

Here's a short video with insight into why the ascent of the Dawn Wall is such a big deal.

Communicating with the world in real-time

Had this climb not included real-time engagement by the climbers, the wider world wouldn’t care.

But because Caldwell and Jorgeson conceived of the adventure as something that anyone could follow along with, millions took notice.

I first heard of the climb on January 6 when the pair talked to NPR's Melissa Block live from 1,200 feet up the face of "El Cap" while relaxing in their suspended lodgings. Wow! A live radio interview during the climb!

I then learned that Caldwell and Jorgeson were sharing live on Facebook and Twitter. (They charged their electronics with @GoalZero solar panels.)

Corey Rich, a climber-photographer followed them and sent images from the wall via his @coreyrichproductions Instagram feed and there was a live video feed from the ground.

Everyone was using the #LiveDawn hashtag to share updates.

The media really got into it over the past few days. While I watched Google News yesterday during the final push to the summit, there was one story updating every few minutes and a tweet every few seconds using the #DawnWall hashtag.

Conquering your fear of real-time media

Many people tell me they “don’t have time” to participate in real-time media. Or they make an excuse like “I’m in a highly regulated industry so I can’t put myself out there.”

These are just excuses. They main issue is fear.

As I wrote about last week, 2015 is The Year to Manage your Fear.

We all face fear in our professional and personal lives. Fear of the strange, of the new, of the untested. We fear bucking the trend and going against the accepted. It's a natural human response.

To truly achieve greatness, you must act. That might mean you are a pioneer, a rebel, an instigator. You may need to challenge the status quo and make a difference in the world.

Yes, you might fail. You could even fail spectacularly.

But a fear of failure is not a reason to sit in front of the television all evening instead of working on that project that’s burning away in your gut.

Fear is not a reason to avoid real-time media.

Just ask Caldwell and Jorgeson. Nobody would blame them if they didn’t take their electronics on the climb.

“I hope it inspires people to find their own Dawn Wall, if you will,” Jorgeson was quoted by the New York Times as saying of their feat. “We’ve been working on this thing a long time, slowly and surely. I think everyone has their own secret Dawn Wall to complete one day, and maybe they can put this project in their own context.”

What’s your #DawnWall? It’s time to conquer your fear.

2015 is the year to engage your audience in real-time.