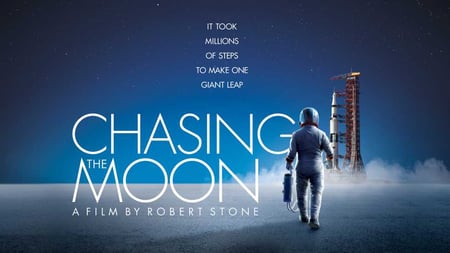 I’m super excited that after many years of hard work, the first part of Chasing the Moon, a three-part mini-series by Robert Stone, premieres today on PBS American Experience. Parts two and three come Tuesday and Wednesday. The idea for Chasing the Moon came when Robert read my book Marketing the Moon: The Selling of the Apollo Lunar Program which I co-wrote with Rich Jurek.

I served as a Consulting Producer on Chasing the Moon, providing advice and documents and moral support as well as introducing Robert to important people in the story including Apollo 11 astronaut Buzz Aldrin.

My fondest memory of working on the film was when Robert and I traveled to Cocoa Beach Florida in 2015 to interview Jack King, Public Affairs Officer for NASA who was known as the “Voice of Apollo” for his work as Kennedy Space Center Chief of Public Information.

Chasing the Moon reimagines the race to the moon for a new generation, upending much of the conventional mythology surrounding the effort. The series recasts the Space Age as a fascinating stew of scientific innovation, political calculation, media spectacle, visionary impulses and personal drama.

Utilizing a visual feast of previously overlooked and lost archival material — much of which has never before been seen by the public — the film features a diverse cast of characters who played key roles in these historic events. Among those included are astronauts Buzz Aldrin, Frank Borman and Bill Anders; Sergei Khrushchev, son of the former Soviet premier and a leading Soviet rocket engineer; Poppy Northcutt, a 25-year old “mathematics whiz” who gained worldwide attention as the first woman to serve in the all-male bastion of NASA’s Mission Control; and Ed Dwight, the Air Force pilot selected by the Kennedy administration to train as America’s first black astronaut.

In the USA the film is available on PBS broadcast stations as well as streaming. Learn more here.  It's also available for purchase as DVD and Blu-ray and here is the Amazon USA link. The film will be broadcast in many other countries as well but I am not sure about the schedule.

Having seen every film about Apollo, I can say with certainty there are stories in Chasing the Moon that will be new to even the most passionate Apollo geeks. Besides that, it is great storytelling and will capture your interest no matter how much you know about Apollo.

I want to thank Robert for his tremendous efforts in getting this project done. This is now a tremendously important part of the historical record of Apollo. Many of these stories wouldn’t have been told otherwise and would have been lost to humanity.