Google Plus now going all AOL on us

UPDATE January 30, 2014 - Google contacted me via my G+ and gave me this URL. plus.google.com/+DavidMeermanScott I guess somebody was listening after all.

++++++++++++++
Fifteen years ago I started using my full name - David Meerman Scott – as my byline in the books and magazine articles I was publishing. And in 2002 when I left the corporate world to start my own marketing strategy business, I continued to use my middle name in my work.

I made the “David Meerman Scott” choice because there are so many people whose name is “David Scott”. Some of us are famous -- one walked on the moon as commander of Apollo 15, a David Scott is a US Congressman from Georgia and another of us is a six-time Iron Man Triathlon Champion and the first inductee into the Iron Man Hall of Fame. Certainly good company.

I realized in the late 1990s that I was competing in the search engines with my similarly named brethren. At that time I chose to be unique in the world. There is no other David Meerman Scott out there.

Google Plus now going all AOL on us 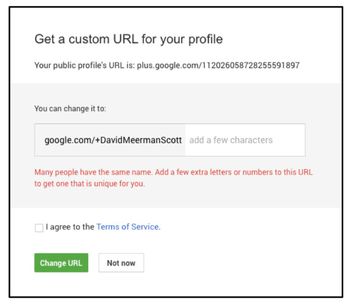 Recently when I visited my Google Plus account - +David Meerman Scott – I was greeted with a message that I could get a custom URL for my profile. My current URL plus.google.com/u/0/112026058728255591897 could be turned into a URL with my name.

I learned that even if you are the only person in the world with your name, Google won’t let you use it. Sadly, the Google Plus Custom URL isn’t really custom.

Google makes you add an AOL style letter and number sequence to your user name. So it’s not really a “custom” URL is it? Even if nobody else on the planet has your name you can’t use it. Ugh. Forget it.

The RED LETTER ERROR MESSAGE says: “Many people have the same name” [not true in my case] “Add a few extra letters or numbers to this URL to get one that is unique for you.” [no, thank you]

Sorry, but I don’t want my personal brand to change to DavidMeermanScott52 or some such nonsense.

Anyone from Google Plus listening?

Yes I guess they were listening. Here is what I saw when I logged into G+ this morning.