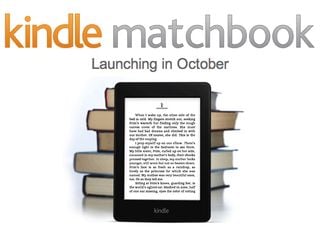 This morning, Amazon announced an October launch of Kindle MatchBook, a new program that will allow people who have purchased print copies of a title to get the same title as a Kindle ebook for a nominal price, ranging from free to $2.99.

As an avid reader this is great news

I’m happy to have the ability to read paper books at home and then when I travel, bring the ones I am part way done with on my trips and to read on my Kindle.

For example, I am now reading the hardcover edition of Alone on the Ice: The Greatest Survival Story in the History of Exploration in preparation for my trip later this year to Antarctica. I like the paper version when I am at home, especially with books like this one that have maps and photos. But this weekend I’m on the road, so I’d love to have this book, which I already own, on my Kindle. In the past, I’ve sometimes double-purchased, but not always. Now, with Kindle MatchBook, I’ll get many more books in both formats.

As an author, I love this even more

I’ve gotten dozens of emails from the readers of my books who want to have both print and digital of the same title. They tell me they own the print version and ask if there is anything I can do to get a free digital version for them.

Alas, no. There is nothing an author can do. The online booksellers like Barnes & Noble (Nook), Apple (iBook), Amazon (Kindle) and the like, working with publishers, control pricing and distribution.

As an author, I want people who purchase my content to have access to it in any way they want. I suspect many authors will complain because the think an approach like this will take money out of their pockets because people willing to pay full Amazon price for both a Kindle edition and a print edition will now pay less. Actually, that’s true!

The benefits of happy readers exposed to your books who might by your next one far outweighs the downside financial aspects.

In the case of my bestselling book The New Rules of Marketing and PR which has sold more than 300,000 copies over four editions, I guess some 20% of copies sold since 2007 are digital. The percentage of digital editions vs print keeps increasing over the years so those selling now are likely higher than 20%.

Here’s some math: If a (wild guess here) quarter of my digital sales for The New Rules of Marketing & PR are people who also own print, that means 15,000 copies sold to people who already paid once for the content. At, say. a "typical" 20% author royalty on a $9.99 ebook we’re talking $30,000 royalties over seven years for people who have already purchased once, which is about $4,000 per year that I’d give up under this scenario.

Yes, I am thrilled to make my most avid readers happy in exchange for a few dollars less in my bank account. Because I know, as a reader myself, that happy content consumers come back for more. I’ll certainly make more in the long run on future book sales than I’d lose by getting people to pay twice.

Thank you Amazon for Kindle MatchBook.

This is a lesson the music business forgot

Rather than clamp down and live in the past the music executives, instead we authors, publishers, and booksellers like Amazon need to put customers first.