NEW 4th edition of The New Rules of Marketing & PR 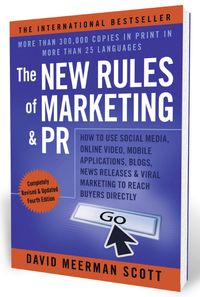 Today, the pre-order of the new 4th edition of The New Rules of Marketing & PR is the "Deal of the Day" at BN.com.

As such, if you purchase a copy at Barnes & Noble today or over the next week, it will be 50% off the cover price of $24.00. They will ship the book worldwide.

The official publication date is July 1, but some retailers such as Amazon.com and BN.com are likely to ship a bit earlier in the U.S. – most likely late this week. International booksellers will ship a bit later.

What's new with the New Rules

Of the four updates to New Rules, this 4th edition is the most comprehensive. The new edition has new chapters on Newsjacking and marketing with images using tools like Pinterest and Instagram. There are a bunch of new stories too. I've added so much new material it runs about 70 pages longer than the 3rd edition which was also a major re-write.

I'll be blogging about the changes in marketing over the past few years which required me writing thus updated 4th edition and I'll be releasing some free material on my blog over the next few days.

The New Rules of Marketing and PR originally published in 2007. Over the four editions, it has sold more than 300,000 copies and available in over 25 languages from Bulgarian to Vietnamese.

Thank you to all who have purchased previous editions!