When newsjacking is in poor form and can damage your brand

Mike Volpe, HubSpot CMO, apologized for the tone of the original post in an update to it now called Is Newsjacking Hurricane Sandy Right or Wrong?

The original HubSpot post sparked a very important discussion which was continued here and in Mike's update. We needed to get these issues out in the open. Getting the pros and cons of newsjacking out there is incredibly valuable.

I love the HubSpot blog. Normally, I agree with what they have to say and I frequently tweet links and leave comments. I am an advisor to the company and wrote Marketing Lessons from the Grateful Dead with HubSpot CEO Brian Halligan, so I have deep ties to the company.

HubSpot got this one wrong: 5 Hurricane Sandy Newsjacks From Marketers.

Having written the book Newsjacking: How to Inject your Ideas into a Breaking News Story and Generate Tons of Media Coverage I feel I need to jump in here and offer my take.

When newsjacking is in poor form and can damage your brand 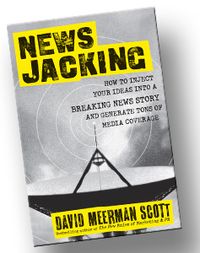 According to early news reports (I'm writing this early in the morning after the storm hit), Hurricane Sandy has caused $20 billion in economic damage and at least 15 people have lost their lives. A million people have been under orders to evacuate their homes and 7 million people are without power.

This is not the sort of story to promote cosmetics and fashion, two ideas on the HubSpot post.

These sorts of frivolous newsjacking ideas give the concept of newsjacking (and marketers in general) a bad name because it is a blatant attempt to exploit a tragedy.

Newsjacking is a powerful tool, but you risk unleashing the power in a negative manner that can seriously harm your brand if you exploit something in poor taste like a major storm. Kenneth Cole learned this lesson the hard way when he attempted to newsjack the revolution in Egypt.

You need a legitimate tie to the story 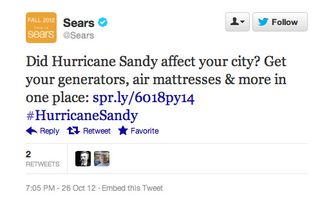 To be successful, attempts at newsjacking must have a legitimate tie to the story, especially when the story is about a disaster, death, or any other negative. The examples in the HubSpot blog post about marketers relating fashion and cosmetics to Hurricane Sandy are in the Kenneth Cole category.

The HubSpot post also references a tweet by Sears pointing to supplies they sell that could be useful in the storm’s aftermath such as generators. This is an example of a legitimate tie and something that is valuable.

Sears would really nail it if they offered a real-time store search feature so consumers could find out if their local store had supplies such as batteries and generators. I could see that being picked up in the media and benefiting Sears.

I'm thrilled that the ideas in my Newsjacking book have become popular with marketers. As an author, that's the ultimate – having others take your idea and run with it. But newsjacking is tricky. We’ve got to work together to show not only the positive side, but the potential pitfalls as well.